The majority of refugees worldwide are not men older than 19

A meme first shared at the height of the European migrant crisis of 2015 has resurfaced on Facebook in North America in late 2019. It claims that official figures from the UNHCR, the international body in charge of protecting refugees, show that 75 percent of these people forced to flee their countries are men between 19 and 45 years old, while only 13 percent are women, and 12 percent are children.

“This is not the profile of a humanitarian disaster but the demographics of an invasion,” the post concludes. 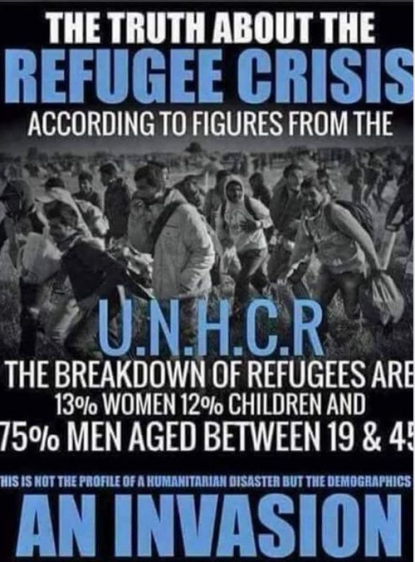 However, these numbers differ greatly from real UNHCR data, which is a combination of numbers collected in UNHCR refugee camps and government agency figures.

“We do not endorse this communication at all,” Emmanuelle Paciullo, a communications officer for the UNHCR in Canada told AFP in an email regarding the figures in the meme above.

A refugee as defined by the UN agency is “someone who has been forced to flee his or her country because of persecution, war or violence.” At the end of 2018, there were 20,360,562 refugees under the UNHCR’s mandate. Another 5.5 million Palestinian refugees fall under the United Nations Relief and Works Agency (UNRWA).

These proportions do vary based on the country or region in which refugees settle. In Canada, UNHCR data counted 114,109 refugees and people in refugee-like situations at the end of 2018. Of those, 37 percent were under 18, while 48 percent were women, and 31.27 percent were men between 18 and 59 years old.

The numbers also show that, both globally and in Canada, four percent of refugees are over 60 years old, an age category that was left out of the false publication.

Table of refugee demographics based on UNHCR data (AFP )

The current global refugee population registered with the High Commissioner for Refugees is the highest on record. Turkey hosts the largest refugee population, with nearly four million individuals at the end of 2018. More information on refugee statistics is available on the UNHCR’s webpage here.