A video has been viewed thousands of times in multiple posts on Facebook, Twitter and YouTube alongside a claim it was produced by the Canadian health authority to illustrate how the novel coronavirus, COVID-19, is transmitted between people. The claim is false; the video was produced by a regional hospital trust within the UK’s public healthcare system, the National Health Service (NHS), in May 2010 about how infections spread in hospitals.

The four-minute 29-second footage shows how infections spread in hospitals through close contact. 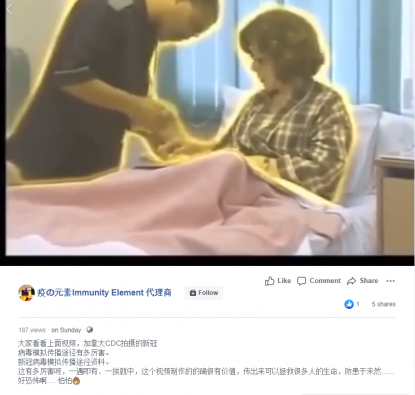 The video’s simplified Chinese-language caption translates to English as: “Everyone take a look at the video above, see how quick the simulated transmission of the novel coronavirus filmed by Canadian CDC can be./Information about simulated novel coronavirus transmission./That's so quick, one will be infected right after contact, the video is very valuable, and can save many people's lives if widely spread, and prevent while we’re still safe…/So terrifying…I'm scared”.

The COVID-19 pandemic has killed more than 8,800 people worldwide and infected almost 210,000 others, as reported here by AFP on March 19.

Canada has confirmed 569 cases of COVID-19 across the country, including eight deaths, as of March 18, 2020. In response, Prime Minister Justin Trudeau announced Canada would be closing its borders to all non-citizens and promised a sizable aid package for its people, reported here by AFP.

The claim is false; the video was produced by the University Hospitals Birmingham, a regional NHS hospital group in the UK, almost a decade before the COVID-19 outbreak.

Below is a screenshot of the video in the misleading post at its final second: The video caption reads: “The "break the chain" video shows how easy it is for hospital-acquired infections like MRSA and Clostridium difficile to be spread.

“Please make sure you wash your hands and use the alcoholic hand gels when visiting our hospital.”

Below is a screenshot comparison of the video in the misleading Facebook post (L) and the University Hospitals Birmingham NHS Foundation Trust video (R):