Two images have been shared hundreds of times on Facebook and Twitter alongside a claim that they show a Muslim woman who was accepted into the Indian Administrative Service (IAS), the nation’s premier civil service. The claim is false; the images show a young girl meeting Indian police at an event to mark International Women’s Day.

The photos were published on Facebook here on March 8, 2020. 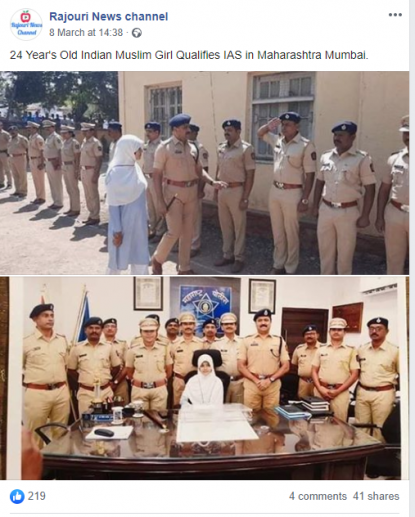 The IAS is the Indian government's permanent bureaucracy.

Mumbai is the capital city of Maharashtra, a state in west India.

The photos were also shared alongside a similar claim on Facebook here, here, here and here and on Twitter here.

A Google search found the photos in fact show Indian police bestowing a 14-year-old girl with a ceremonious police rank at an event to mark International Women’s Day. The event took place in Buldhana, a district in Maharashtra more than 500 kilometres east of Mumbai.

Video from the ceremony was published on YouTube here on March 5, 2020 by The Times of India, an English daily newspaper.

The video's title reads: “Women’s Day: 14-year-old girl becomes DSP ‘for a day’ in Maharashtra’s Buldhana.” DSP refers to a rank of district’s superintendent of police.

Below is a screenshot comparison the photos in the misleading posts (L) and corresponding screenshots from The Times of India video (R): 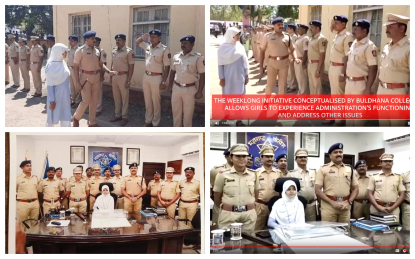 The tweet in Maharashtrian language translates to English as: “‘I want to be a police superintendent. Very important to me today’, the expectation of one-day Police Superintendent Saharish Koval, Zilla Parishad High School, Malkapur.”

The Times of India also published a story about the ceremony here.

“In a unique initiative to boost the confidence of girls and motivate them ahead of International Women’s Day, the Buldhana district administration gave an opportunity to bright girls of government schools to act as collector and superintendent of police for a day,” the article reads.

Below is a screenshot of the photo from the Maharashtrian report: