A video that has been viewed hundreds of thousands of times on Twitter and Facebook purports to show a Greenpeace banner saying: "CONCENTRATION CAMPS" hanging on the side of the Trump International Hotel in Las Vegas. The claim is false; the man who made the video told AFP it was doctored to include the banner; Greenpeace denied any involvement, saying the video was "fake". 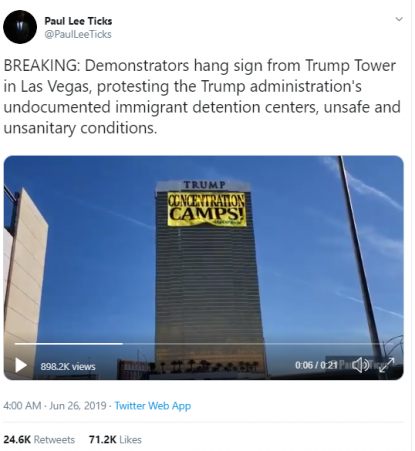 The video purports to shows the Trump International Hotel Las Vegas, which is owned by US President Donald Trump's Trump Organization.

Some migrant detention centres in the US have made international headlines following reports of detained migrant children staying in unsanitary conditions. Here is an AFP report published on July 8, 2019, on the issue.

United States Congresswoman Alexandria Ocasio-Cortez has described the centres as "concentration camps", for example here on Instagram on June 22, 2019, and here in a July 2, 2019 tweet.

The footage of the banner on the Trump hotel has been shared on Facebook here, here, and here, and a screenshot of the video was shared on Instagram here.

But the video has been doctored to include the banner.

Twitter user @paulleeticks told AFP via Twitter direct message on July 7, 2019, that he filmed the original video and edited it to include the banner.

"Yeah I edited it and shot the original vid," he told AFP.

AFP found a similar video of the same hotel with a different doctored banner on the same account for Twitter user @paulleeticks.

That video appeared here on Twitter on March 16, 2019. The clip shows a similar yellow banner but with different text: “has a little mushroom dick”, written on it.

That video has been shared thousands of times here and here on Twitter.

Below is a screenshot comparison of the two videos from Twitter user @paulleeticks:

The banners in both videos have “Greenpeace” written at the bottom right corner.

Greenpeace tweeted here on June 26, 2019, a denial of its involvement in the “protest”, saying “this video is fake”.

While this video is fake, the Trump administration’s inhumane detention centers are, tragically, very real.