A video that purports to show a Greenpeace banner which says “BETRAYED AND MURDERED THE KURDISH PEOPLE” hanging on the side of the Trump International Hotel in Las Vegas has been viewed more than a million times in multiple posts on Facebook, Twitter, Instagram and YouTube. The misleading footage was shared shortly after Turkey launched ground offensive against Kurdish forces in Syria. The video has been doctored to include the banner; AFP has previously debunked similar edited footage of banners hanging on a Trump Hotel; Greenpeace denied any involvement in the purported stunt, saying the video was “a computer generated animation”.

The video was published in this Twitter post on October 10, 2019. It has been viewed more than 1.2 million times within six hours.

The 22-second video purports to show the Trump International Hotel Las Vegas, which is owned by US President Donald Trump's Trump Organization.

A banner hanging on the side of the building reads “BETRAYED AND MURDERED THE KURDISH PEOPLE. Greenpeace”. People chanting “not my president” and “Trump this shit” can also be heard in the background. 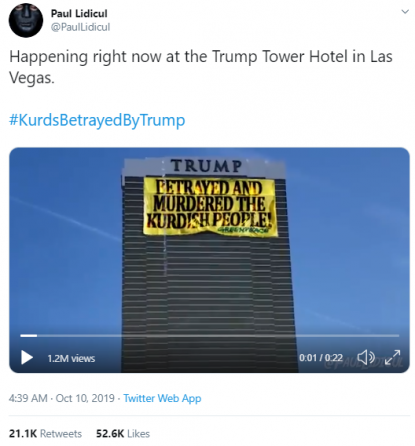 The video was posted hours after Turkey launched ground offensive against Kurdish forces in Syria following a series of air strikes and artillery fire. Turkish President Recep Tayyip Erdoğan announced the operation three days after his US counterpart Donald Trump decided to withdraw US troops from northern Syria. Here is an AFP report about the developments.

The claim is false; the video has been doctored to include the banner.

Those misleading videos showed the same building with doctored banners that read “CONCENTRATION CAMPS” and “HAS A LITTLE MUSHROOM DICK”.

Twitter user @paulleeticks told AFP via Twitter direct message on July 7, 2019, that he filmed the original video and edited it to include the banner.

"Yeah I edited it and shot the original vid," he told AFP.

Below is a screenshot comparison of the video in the misleading post (L) and the other doctored videos (C and R):

The banner in the video in the October 10, 2019, misleading posts has “Greenpeace” written at the bottom right corner.

In an email to AFP on October 10, Greenpeace denied its involvement: “This was a computer generated animation and not executed by Greenpeace.”

The environmental group, which previously said the similarly doctored videos included in the AFP fact-check report were “fake”, also tweeted the clarification on October 10.

We want to make clear that this is a computer generated animation and not executed by Greenpeace.