This video shows an underwater blasting operation conducted in Finland

A video has been viewed hundreds of thousands of times in multiple posts on Facebook, Twitter and YouTube published in 2020 alongside a claim it shows a lightning strike that hit a creek in the US state of Montana. The claim is false; the video actually shows a controlled underwater blasting in Finland in 2012.

The 56-second clip was posted by an Australia-based Facebook user here on June 9, 2020.

At the eight-second mark, a beam of light can be seen hitting the water, before a series of waves erupt. 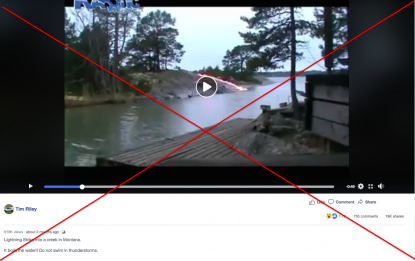 The Facebook post’s caption states: “Lightning Strike into a creek in Montana. It boils the water!! Do not swim in thunderstorms.”

Montana is a western US state.

The claim is false; the video in fact shows a controlled underwater blasting in Finland.

A reverse image search on Yandex found an earlier version of the video published here on YouTube in December 2012.

The Finnish-language caption of the YouTube video translates as: “Drilling piling, part 3: Blasting”, and the caption states: “In this video, we deepen the waterway.”

The footage was uploaded by Rannikon Merityö, a dredging, excavation and beach construction company based in Taivassalo, southwest Finland.

In an email to AFP on July 30, a spokesperson for Rannikon Merityö said: “The video was shot in the summer of 2012 in Kustavi (southwest Finland). It shows an explosion of an underwater solid rock. This kind of blasting work is part of the services provided by our company. The video has spread around the internet, including to scam sites. However it is a man-made thing not a natural phenomenon.”

The footage is also featured here on the company’s website and here on its Facebook page, alongside information about underwater mining, excavation and mining.

The false claim previously circulated online in 2017 and has been debunked by US broadcaster KARE and fact-checking organisation Snopes here and here.