A video has been shared thousands of times in multiple posts on Facebook which claim it shows a woman who was detained by police in Australia after she tested positive for the novel coronavirus, COVID-19, and was filmed spitting at a supermarket in a Sydney suburb. The claim is misleading; the video has been created from two clips of separate incidents involving different women; police in Australia said the first clip shows a woman who was questioned and released after a disturbance at a store in a Sydney suburb; the Australian supermarket chain cited in the misleading posts said the second clip was not filmed in its stores.

The first clip shows a woman being detained by police. Text superimposed on the clip reads: “Digusting [sic] She was tested positive for Covid-19 n caught spitting on the fruits”

The second clip appears to show a woman spitting on bananas at a store. The text overlaid on the video says it was shot at “Chullora Woolworths,” a supermarket in a suburb in Sydney, Australia. 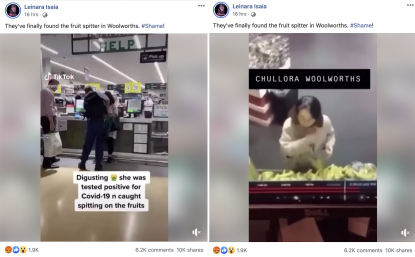 A New South Wales Police spokesperson told AFP via email on March 24, 2020, that the first part of the video relates to an incident in Gordon, a suburb in Sydney.

“About 9.40am (Thursday 19 March 2020) police were at a Gordon Supermarket when they were alerted to a disturbance between [a] customer and a staff member,” the statement read.

“The customer was repeatedly asked to leave the store by staff and police. She refused, and the 54-year-old woman was arrested and taken to Gordon Police Station. She was spoken to about her behaviour at the store and released.”

Australian news outlet 7 News featured the first part of the video here on its Facebook page on March 19, 2020. It stated the incident happened at a store in Gordon.

A Woolworths spokesperson told AFP on March 24, 2020 that the incident shown in the second part of the video did not happen at its Chullora store.

“We can confirm this wasn't at our Chullora store. We encourage customers to be wary of misinformation on social media,” the Woolworths spokesperson said.