This video shows a swarm of birds in Texas in 2016

A video has been viewed thousands of times in multiple posts on Facebook, Twitter and YouTube in May 2020 alongside a claim it shows crows “coming to Texas” after “attacking Wuhan, China”. The posts were shared as countries worldwide continue to fight the spread of the novel coronavirus, which was first detected in Wuhan in December 2019. The claim is false; the video shows black birds swarming the US state of Texas in December 2016; the audio of the video in some of the posts has been manipulated.

The three-minute nine-second footage was published here on Facebook on May 16, 2020. It has been viewed more than 4,300 times.

The post's Indonesian-language caption translates to English as: “Viral !! Thousands of crows coming to Texas, America
After attacking Wuhan, China”. 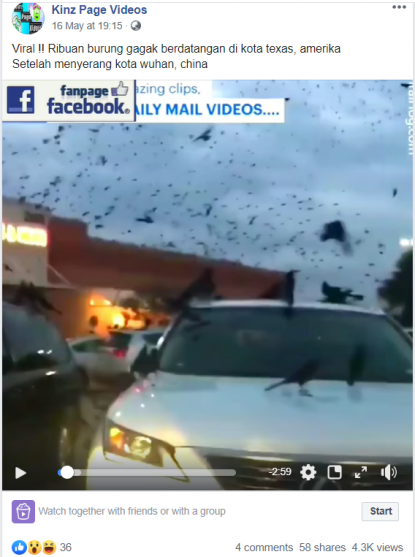 A woman’s voice can be heard describing the situation while filming the crows from her car.

A logo for the MailOnline, the website for UK newspaper The Daily Mail, can be seen at the end of the video.

Almost 1.5 million people in the US have been infected with the novel coronavirus and the death toll has exceeded 89,000, according to WHO data on May 19, 2020.

The footage was also shared with similar claims on Facebook here, here and here; on Twitter here and here; and on YouTube here and here. Instead of the woman’s voice, the clips feature the sounds of panicked people.

The same footage with the audio of people panicking was also shared alongside a similar claim in Malaysian language on Facebook here and here.

The claim is false; the video shows black birds swarming in the US state of Texas in December 2016, years before the COVID-19 pandemic. The audio in the videos with voices of people panicking has also been manipulated.

The original footage was published by video-licensing company ViralHog on YouTube here one day before the Daily Mail’s report.

“‘I left H-mart and was returning to my car with groceries. I noticed the birds were very noisy as I was leaving, but the sky wasn’t filled with them as bad as shown in the video. I got to my car while some people waiting at the entrance of the building watching. They were smart for waiting because in the next minute, my car got pooped on big time. As you can see, the area filled with birds very quickly. Apparently, these are blackbirds and they gather just as the sun goes down. I don’t know the exact scientific reason for it, but there is one and it happens often. I remember seeing groups of birds like this a lot when I was younger, but it was never ever this many!’”

The audio in the ViralHog footage includes the same woman’s voice as can be heard in the first misleading clip and the Daily Mail video.

Below is a screenshot comparison of the scenes in video in the misleading post (L) and the ViralHog video (R): 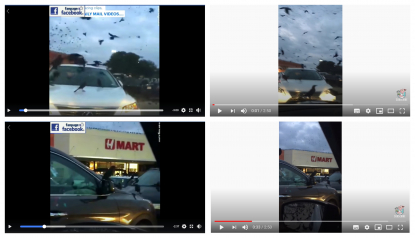 The Google Street View of H Mart in Carrollton, Texas, can be seen here and matches the buildings seen in the footage.

Similar incidents were captured in this YouTube video, dated February 2017, and this ViralHog footage from February 2018.

Misleading claims about crows flocking the Chinese city of Wuhan during the coronavirus outbreak were widely shared on social media in February 2020. The crows, however, were seen in Xining, a city located 1,000 miles from Wuhan. AFP Fact Check debunked the misleading claim here.