This video shows crows in the Chinese city of Xining -- 1,000 miles from Wuhan

A video has been viewed tens of thousands of times in multiple posts on Facebook, Twitter, Instagram and YouTube published in February 2020 alongside a claim that it shows a murder of crows in the sky over the Chinese city of Wuhan following the novel coronavirus outbreak. The video has been shared in a misleading context; it shows scores of crows in the Chinese city of Xining, more than 1,000 miles northwest of Wuhan.

It shows a murder of crows flying at night over a street.

The post’s caption states: “A truly disturbing number of crows have descended into Wuhan, China... what could be attracting so many? Hundreds of people die all the time. Their city is bigger than New York... No what’s happening here is much bigger and much darker.” 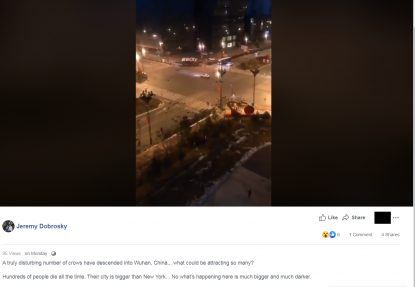 The novel coronavirus has killed more than 1,300 people and infected almost 60,000 others in China after it was discovered in Wuhan in late 2019, AFP reported here on February 13, 2020.

A shorter version of the clip was also shared here on YouTube and here on Instagram with a similar claim.

The claim is misleading; the video was filmed more than 1,000 miles northwest of Wuhan in the Chinese city of Xining in Qinghai province.

A keyword search found the same video in an earlier post published here by Twitter user @nerd_hawk on February 11.

Below is a screenshot comparison of the video in the misleading posts (L) and the video posted by Twitter user @nerd_hawk (R):

A screenshot comparison of the two videos

A search on Baidu Maps found the location in the video directly corresponds with this junction in the Chinese city of Xining.

Below is a screenshot comparison of the video in the misleading posts (L) and the street view imagery on Baidu Maps (R) with some corresponding elements circled in red by AFP:

A keyword search also found parts of the video in the misleading posts published here on Weibo by Chinese media outlet Pear Video on February 11.

The video’s simplified Chinese-language caption translates to English as: "#CrowsswarmedXiningstreets#, residents: a familiar, terrifying yet beautiful winter scene] February 9, 2020. Xining, Qinghai. A man named Hua Yi posted a video showing a group of crows flying over Wencheng Road and caught netizens’ attention. He said the sighting had been common since he moved to the area in September last year, at the beginning of winter. It is a little scary yet wonderful to see dark objects moving above the street in the evening, about 7 pm."

Below is a screenshot of the Pear Video report: 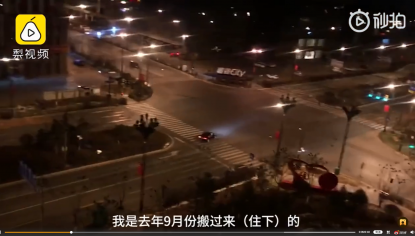 A screenshot of the Pear Video report