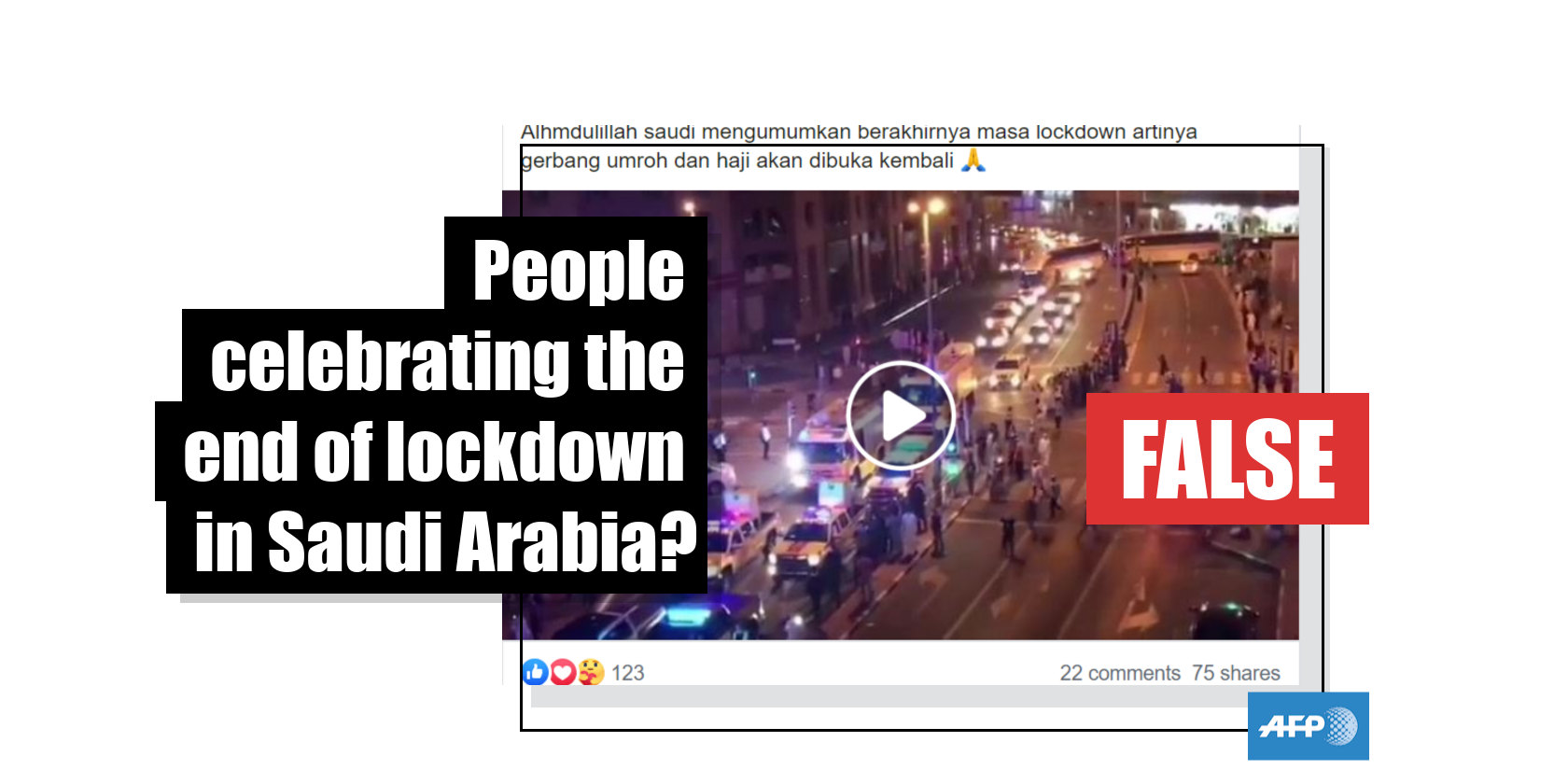 A video of a street parade has been viewed tens of thousands of times in multiple posts on Facebook, Instagram, TikTok and YouTube alongside a claim it shows people celebrating the end of a coronavirus lockdown in Saudi Arabia. The claim is false; the video was filmed in Dubai; the footage corresponds with media reports about residents celebrating on the streets after Dubai authorities eased 24-hour quarantine measures in two districts.

The post’s Indonesian-language caption translates to English as: “Alhamdulillah saudi has announced the end of the lockdown period which means the gate of umrah and hajj would be reopened.” 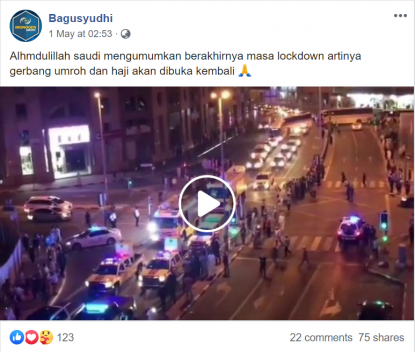 The Saudi government announced on May 26, 2020, to partially ease nationwide curfews for two weeks, AFP reported here. The 24-hour lockdowns, however, remained in some areas that were hardest hit by the novel coronavirus pandemic, including in Mecca and quarantined neighbourhoods of Medina, Dubai-based news channel Al Arabiya reported.

Since early March 2020, Saudi Arabia has suspended the year-long umrah pilgrimage and asked people to defer preparations for the annual hajj pilgrimage to Mecca and Medina due to the pandemic.

As of May 7, 2020, the novel coronavirus, which causes the disease COVID-19, has killed more than 200 people and infected more than 33,000 people in the country, according to this WHO data.

The same footage with a similar claim in Malaysian language can be seen here.

The claim is false. A reverse image search on Google followed by a keyword search found this identical, longer clip uploaded on YouTube on April 27, 2020.

The Dubai Media Office tweeted on April 27, 2020, saying: “Dubai's Supreme Committee of Crisis and Disaster Management eases restrictions on movement in Al Ras and Naif. The Decision comes as both areas record zero COVID-19 cases in the last two days. Restrictions on movement will continue to be in place between 10.00 pm and 6.00 am as with the rest of the emirate.”

Al Ras and Naif are two neighborhoods located in Dubai.

Below is a screenshot comparison between the footage in the misleading post (L) and video on YouTube (R):

AFP found the misleading footage was taken at 27th Street in Dubai.

Below is a screenshot comparison between footage in the misleading post (L) and Google Street View (R), with identifiable structures circled in red by AFP:

A video showing a similar scene was uploaded by Dubai police on Twitter here on April 28, 2020.

The tweet reads: "Residents in Naif area erupted in celebrations following the ease of the 24-hour quarantine measures after recording zero COVID-19 cases. They commended the UAE efforts to contain the pandemic and provide the highest levels of protection to all community members."

Residents in Naif area erupted in celebrations following the ease of the 24-hour quarantine measures after recording zero COVID-19 cases. They commended the UAE efforts to contain the pandemic and provide the highest levels of protection to all community members. pic.twitter.com/0btYnipVWT