A video showing people with machetes attacking what looks like uniformed officers has been shared alongside claims that it depicts members of Uganda’s People Power Movement led by musician-turned-politician and presidential candidate Bobi Wine clashing with police. But this is false: AFP Fact Check found the clip features an elite unit of the Congolese police conducting a demonstration.

“People power fooling themselves that they have power. See how they are handled like grasshoppers,” the caption reads. 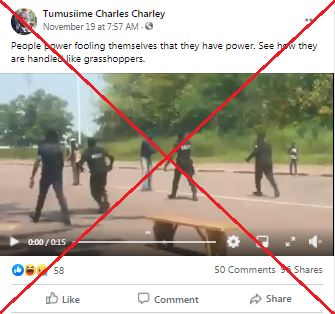 The account holder who posted the video cites Rukungiri in western Uganda as their home town.

Uganda has been mired in violence ahead of the scheduled presidential election on January 14, 2021, which pits Wine against long-serving President Yoweri Museveni. The 38-year-old leader of the People Power Movement has become a lightning rod for Museveni, who is seeking a sixth term.

Since entering the political fray in 2017, Wine has been repeatedly detained, his concerts are routinely banned and public rallies have been broken up with teargas.

The latest deadly protests, covered by AFP here, erupted after Wine was briefly arrested ahead of a political rally in early November.

“Paka” can be loosely translated as “until one’s last breath”.

Not a video from Uganda

Comments on the Reddit post indicate that the video depicts a training exercise, but without specifying a location.

Our search also revealed this debunk in French by fact-checking organisation Data Cameroon, which found a longer version of the video. This 35-second version of the video shows a second man with a steel pipe also being disarmed as well as a cameraman filming the altercation.

Screenshots of a cameraman and police in a longer version of the video taken on November 27, 2020

Towards the end of the video, the uniformed men with vests labelled “police” or “BSIR” are seen piling into a blue truck with the logo “BSIR - Brigade Spéciale d'Intervention Rapide”, or “Special Rapid Intervention Brigade”. 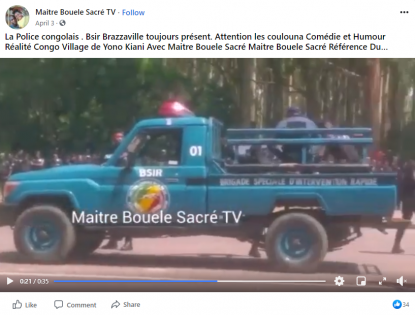 A screenshot of the longer video showing a marked blue truck taken on November 27, 2020

A basic internet search of “BSIR” led to a Facebook page by the same name, categorised as “armed forces” and described as “Brigade spécial d'intervention rapide, Police national du Congo”.

Other pictures shared on the page show men wearing the same uniform and the same blue trucks seen in the video. The logo also appears as the header on the page. Many of the photos are tagged Brazzaville, Republic of the Congo, as seen in the image below.