A video has been shared hundreds of thousands of times on Facebook and YouTube alongside a claim that it shows a robbery outside a mall in Malaysia. The claim is false; the clip shows a simulation of a robbery that was staged by Malaysian police for a public awareness campaign.

The video was published on Facebook here on October 25, 2020. It has been viewed more than 33,000 times before it was removed.

The 26-second video shows a person stealing a handbag from a woman before mounting a motorcycle in order to flee the scene. 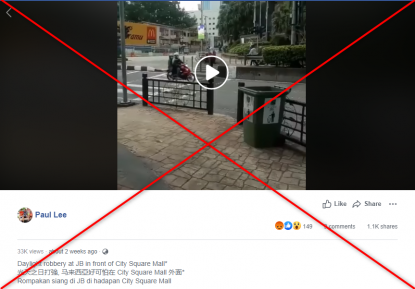 JB refers to Johor Bahru, the capital of Johor state, in Malaysia.

The video has been viewed more than 210,000 times after it was posted with a similar claim on Facebook here, here and here; as well as on YouTube here and here.

A reverse image search using keyframes generated from InVID-WeVerify, a digital verification tool, found a screenshot from the video was published on June 26, 2020, in this report by Malaysian Chinese-language daily Sin Chew Daily.

Below is a screenshot of the video in the the misleading post (L) and the video in Sin Chew Daily’s report (R):

The report’s Chinese-language title translates to English as: “Video of woman being robbed is widely shared, it turns out to be police filming security promotional video.”

“Johor Bahru South police chief Padzli said that police officers from the district headquarters filmed a security promotional video in the downtown area of Johor Bahru from 4 pm to 6 pm yesterday, in order to remind the public of snatchers.

“He said that the video currently circulating online indeed shows the scene when police officers filmed the video at that time.”

Below are screenshot comparisons of the video in the misleading post (L) and the police’s video (R) – AFP has circled some similar features in red: 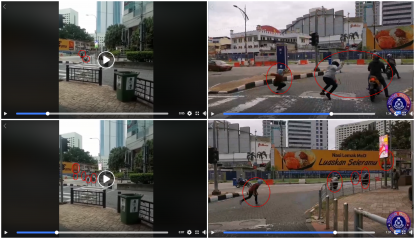