A video has been viewed tens of thousands of times in multiple posts on Twitter, Facebook and Weibo which claim it shows a 74-year-old woman dancing with her grandson. The claim is false; the video is a clip from a Chinese dance television programme that shows a 26-year-old Chinese ballet dancer with her dance partner.

Simplified Chinese characters superimposed on the video translate to English as: “Grandparent and grandchild dancers”.

At the bottom of the video, it states: “It's not surprising if we just think it's just a very good pair of dancers, but if I tell you it's a grandparent with her grandchild dancing, can you believe it? The female dancer in the video is 74 years old. The man is her grandson. From a dance, we can see the infinite potential of life.” 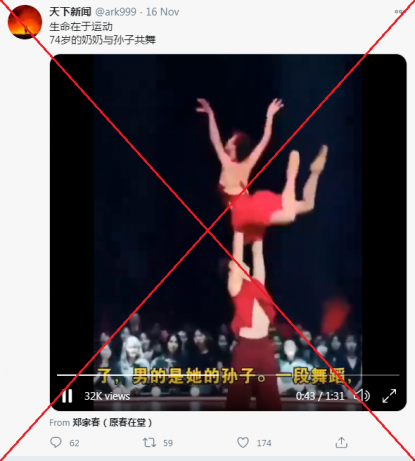 A keyword search based on the video found a longer version of the same footage on Weibo here.

It was published on the official account of a Chinese dance television show called Dance Smash, and is an extract of an episode that aired for the first time on October 12, 2019.

The Weibo dance video corresponds with the misleading footage from the 17-second mark to one-minute and 46-second mark.

Below are three sets of comparisons between the Twitter footage (L) and the video published by Dance Smash’s account on Weibo (R): 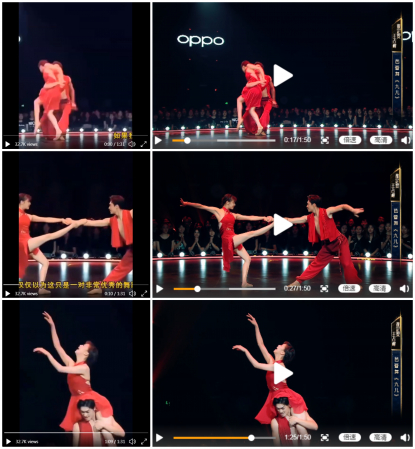 The Weibo video also shows names of the male and female ballet dancers Wang Zhanfeng and Ao Dingwen. Their Weibo accounts are also mentioned in the video caption.

The claim does not refer to the two ballet dancers as grandma and grandson. 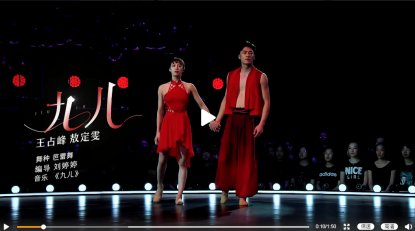 Screenshot of the Weibo video showing names of the ballet dancers

According to Ao Dingwen’s official Weibo account, she turned 26 years old on June 28, 2020, as seen in this post.

According to the full Dance Smash episode firstly shown on October 12, 2019, which can be seen on YouTube here, Wang Zhanfeng claims at the one-hour, five-minute and 24-second mark that he is 22 years old. 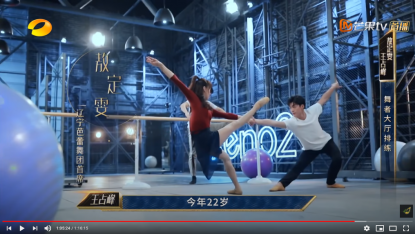