A video has been viewed and shared tens of thousands of times on Facebook, Twitter and YouTube alongside a claim that it shows Kuwaitis throwing away French products after boycott calls triggered a standoff between France and some Muslim countries over Islam and freedom of speech. The claim is false; the video has circulated in reports about a Saudi supermarket disposing dairy products in May 2020 – months before the calls to boycott French products. 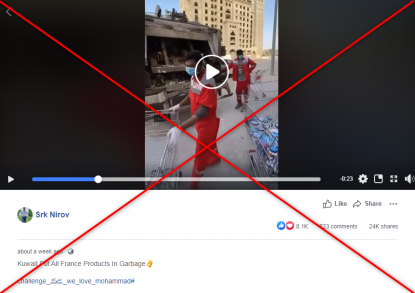 The caption reads in part: “Kuwait Put All France Products In Garbage.”

The post circulated online following calls to boycott French products in the Islamic world. The calls came in response to French President Emmanuel Macron's defence of the right to criticise Islam as part of freedom of speech, as reported by AFP on October 25, 2020. Images on social media showed workers removing French cheese from shelves at Kuwaiti stores.

The same video was also shared with a similar claim in Malaysian language here and here.

Translated to English, the voice speaking Arabic in the video says: “The destruction is carried out under the supervision of (inaudible) municipality, in Al-Ahsa region, in the presence of a representative of the Ministry of Commerce and the Saudi food and Drug Authority.”

A reverse image search using keyframes extracted with digital verification tool InVID-WeVerify, followed by a keyword search, found the video was tweeted by UAE-based TV channel, Al-Arabiya on May 14, 2020, here.

The tweet says: “A spokesman for the Saudi Ministry of Commerce, Abdulrahman Al-Hussein, denies the information contained in a circulating video, stating that the materials that were confiscated and destroyed are ‘carcinogenic’, and reveals that the material is cheese that has shown signs of spoilage due to poor storage.

Below is a screenshot comparison of the video in the misleading post (L) and the video tweeted by Al-Arabiya (R): 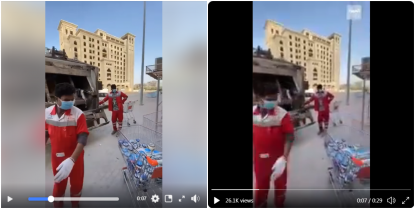 Media outlet Gulf News reported here about the video on May 14, 2020, with a headline: “Saudi Arabia says rotten cheese in video is not cancerous.”

“He said the products, which were affected by improper storage and spoiled, have been confiscated and destroyed, not because of cancerous substances.”