A video of a group of Sikh protesters has been viewed tens of thousands of times in multiple Facebook and Twitter posts alongside a claim that suggests it relates to demonstrations by Indian farmers against new agricultural laws in 2020. The claim is misleading; the video in fact shows a 2018 protest by a group of Sikhs in the US city of San Francisco.

The 51-second video was published on Facebook here on December 8, 2020.

The footage shows bearded Sikh men in turbans chanting in support of Khalistan, a Sikh political ideology in favour of an independent homeland. They can also be heard making derogatory remarks about India and Hindus. Their comments in Hindi translate to English as: "The talk everywhere is that mother India is a thief. The talk is everywhere that Hindus’ mother is a thief. Long live Khalistan." 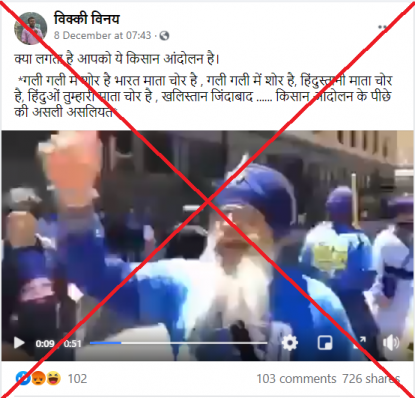 The post was shared as farmers in India demonstrated against new agricultural laws, as AFP reported here on December 7, 2020.

A reverse image search on Google with video keyframes found the footage was published on Facebook here on June 12, 2018, more than two years before the current farmers' protests.

The Punjabi-language caption quotes the anti-India chant heard in the video. It reads in English in part as: “San Francisco Independence March 2018.”

The Sikh men seen marching in the video are wearing custom-made shirts that bear text which reads “stand against injustice”, “march for freedom of Khalistan”, and “San Francisco”.

Below is a screenshot at the video’s 38-second mark with the text outlined in red: 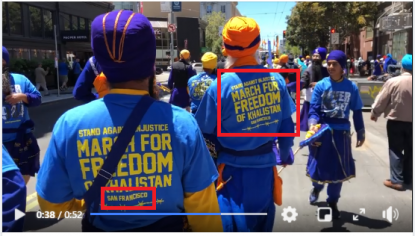 A sign reading “Proper Hotel” can also be seen in the video. This refers to the San Francisco Proper, a hotel located in downtown San Francisco. It can be seen on Google Maps here.

Below is a screenshot comparison of the hotel seen in the video shared in the misleading Facebook posts (L) and the San Francisco hotel seen on Google Maps (R) with corresponding points highlighted in red:

The Sikh demonstration in 2018 was covered by the local press; for instance here by KQED, a regional television and radio network.

“Thousands of California Sikhs and their supporters came out to participate in the 5th Annual Remembrance March and Freedom Rally in downtown San Francisco on Sunday. California is home to close to half of the American Sikh population, many of whom live in the Central Valley,” the report reads.