A video has been viewed thousands of times on Facebook, Instagram and Twitter alongside a claim it shows the King of Bahrain arriving in Dubai escorted by a robot bodyguard. The claim is false; the footage has circulated online in reports about a robot called Titan who greeted visitors at a defence show in Abu Dhabi in 2019.

The Indonesian-language post translates to English as: “The King of Bahrain arrives in Dubai with his bodyguard robot equipped with a camera to track 360 degrees and equipped with a pistol. Technology moves faster than ever in history ...” 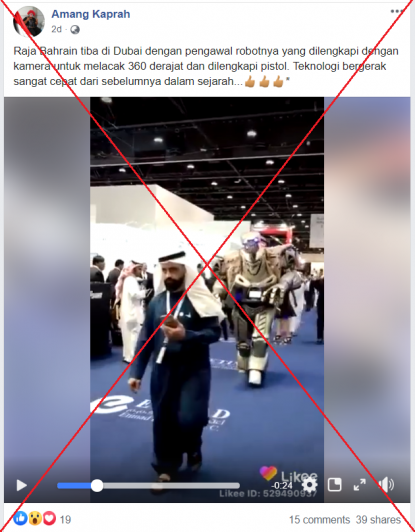 The same footage has been viewed more than 4,200 times after it was shared with a similar claim on Facebook here, here, here and here; as well as on Twitter here and here.

A Google reverse image followed by subsequent keyword searches found this video uploaded on YouTube on February 24, 2020. It shows the same scene as the footage in the misleading post.

The International Defence Exhibition and Conference, or IDEX, is the only international defence trade event in the Middle East and North Africa region. It is held biennially at Abu Dhabi National Exhibition Centre.

Below is a screenshot comparison between the footage in the misleading post (L) and the video on YouTube (R):

The man who is seen being followed by the robot in the video is not the King of Bahrain, Hamad bin Isa Al Khalifa.

Below is a photo of the monarch on the website of Bahrain’s Ministry of Foreign Affairs: 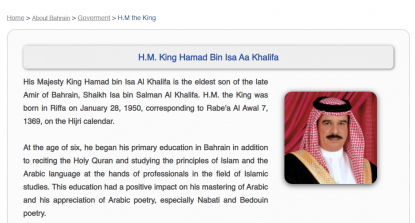 The report states in part: “Titan, a famous walkaround robot, is 8ft tall and weighs 60 kg. He is the world's first commercial entertainment robot artist and was developed by the British company Cyberstein.

“Titan the Robot is an entertainment concept unlike anything on earth and is used by event management companies in the UAE and worldwide to add something very special any festival, corporate party or as the ultimate in shopping mall entertainment. His comedy antics are loved by children and adults alike.”