Skip to main content
A shopper wearing a face mask and shield walks past a billboard inside a mall in Manila on June 2, 2020, a day after the government eased up quarantine measures aimed at preventing the spread of the COVID-19 novel coronavirus in the country's capital. (AFP / Ted Aljibe)

An image has been shared repeatedly in multiple Facebook posts that purportedly shows an announcement from a Philippine retailer about the price of face shields in its malls. The purported price guide states face shields would be sold at SM’s malls and markets at 20 pesos (USD$0.40) per piece in accordance with government guidelines. The claim is false; the retailer said the purported announcement was “fake news”; the Philippine government suggested a retail price range of 26-50 pesos for face shields, higher than that listed in the misleading Facebook posts. 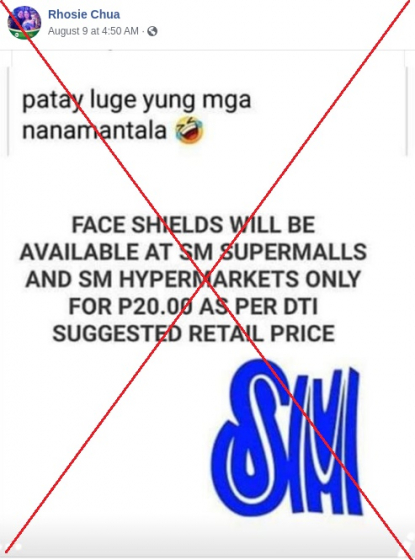 The text in the image reads: “FACE SHIELDS WILL BE AVAILABLE AT SM SUPERMALLS AND SM HYPERMARKETS ONLY FOR P20.00 AS PER DTI SUGGESTED RETAIL PRICE".

A Tagalog-language message above it translates to English as: “Price hoarders would go bankrupt”.

The image bears the logo of one of the Philippines’ largest retailers SM Group, which runs the SM Supermalls and SM Markets chains in the country.

The claim circulated online after the Philippine government announced on August 5 that it would make face shields mandatory on public transport from August 15 onwards in an effort to curb the spread of COVID-19.

“DTI” is an acronym for the country’s Department of Trade and Industry, which monitors prices and supply of commodities, including face shields.

Identical images have also been shared here, here, here and here on Facebook alongside a similar claim.

SM Supermalls issued a statement against the claim, which it branded “fake news”, in this August 7 Facebook post.

The statement reads: “We would like to clarify the information, regarding face shields, circulating on social media did not officially come from either SM Supermalls or SM Hypermarket. Face shields are available for sale in all SM Malls nationwide at various retail prices.” 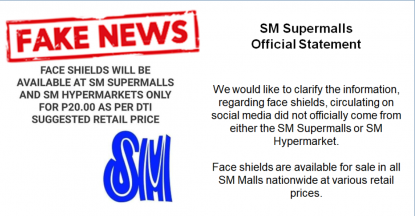 A screenshot of the statement issued by SM Supermalls, taken on August 18, 2020

This government document published on August 10 suggests a price range between 26 and 50 pesos for non-medical grade face shields for community use, higher than the amount listed in the misleading post.

Below is a screenshot of the relevant portion of the document:

The claim has also been debunked by the fact-checking arm of Philippine news site Rappler here.