A video that has been viewed thousands of times in Indonesian social media posts that claim it shows a massive anti-Chinese rally in Kuala Lumpur in March 2021. The claim is false: the video actually shows a rally opposing an anti-discrimination charter in Kuala Lumpur in December 2018.

Translated to English, the post’s caption reads: “Kuala Lumpur, this morning. Opposing the arrogance of the Chinese who want to insult the name of GOD… Praise be to God…. Muslims are becoming more solid in defending the rights and purity of Islam. Hopefully Indonesia can do the same to defend God’s religion…” 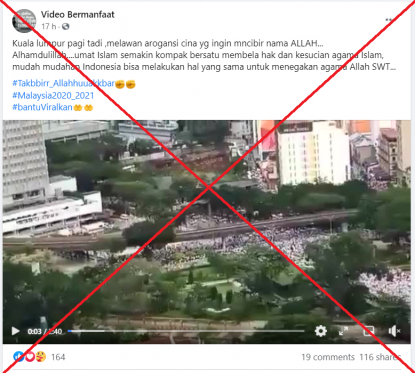 A reverse image search using keyframes obtained from InVID-WeVerify found a slightly longer version of the video published on Facebook here on December 8, 2018.

Translated to English, the caption of the Malaysian-language post reads: “Video taken from the top of a building shows more clearly the massive scale of participants of a rally opposing the ICERD. Some say the number of participants reached 300k. Is it logical?”

“ICERD” refers to the International Convention on the Elimination of All Forms of Racial Discrimination, a United Nations charter that demand signatory countries to commit to pursue a policy of eliminating racial discrimination.

Below is a screenshot comparison of the video in the misleading post (L) and the 2018 Facebook video (R):

Over 50,000 Malay Muslims attended a demonstration, spearheaded by opposition parties the United Malays National Organisation and the Malaysian Islamic Party, at Kuala Lumpur’s Merdeka Square on December 8, 2018, to celebrate the government’s decision not to ratify the ICERD, as reported here and here.

Below are screenshot comparisons of the video in the misleading posts (L) and the Astro Awani video (R), with matching features circled by AFP: