A video has been viewed tens of thousands of times in multiple posts on Facebook and Twitter that claim it shows protesters chanting pro-Pakistan slogans at a rally against India’s new anti-citizenship law in the northern Indian city of Lucknow. The claim is false; a closer analysis of the video found it shows protesters chanting pro-India slogans; the protest's organisers said they heard no pro-Pakistan slogans being chanted at the protest.

The video was shared in this Facebook post published on December 28, 2019. It has been viewed more than 50,000 times. 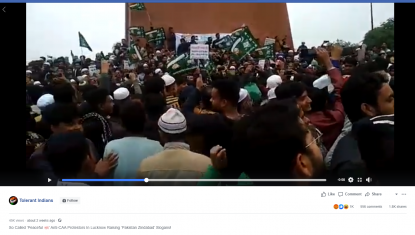 The claim is false; the video shows protesters chanting pro-India slogans at an anti-citizenship law protest.

The video shows a December 13, 2019, protest organised by the All India Majlis-e-Ittehadul Muslimeen (AIMIM) party’s Lucknow office in the north Indian city of Lucknow.

A longer video of the same protest was published here on Twitter on December 29, 2019. The video in the misleading posts corresponds with the Twitter video from the 10-second to the 22-second mark.

The AIMIM’s Lucknow office chief Kashif Ahmad denied reports of pro-Pakistan slogans being raised during the protest in a phone conversation with AFP on January 8, 2020.

“That claim is fake, there were no pro-Pakistan slogans raised in our entire rally. Our supporters only raised anti-citizenship law slogans, pro-party and pro-party, pro-party leadership, including my name, and pro-India slogans,” he said.

Ahmad shared four photos from the protest on his Twitter account here. No pro-Pakistan placards can be seen in these photos.

Another video of the same rally uploaded here on YouTube on December 13, 2019, shows protesters chanting “India is ours”.

According to this report by the English-language Indian daily newspaper Indian Express published December 18, 2019, Lucknow police filed sedition charges against protesters at the December 13 rally “for allegedly raising anti-national and objectionable slogans”.

The Indian Penal Code defines sedition as committed when “whoever, by words, either spoken or written, or by signs, or by visible representation, or otherwise, brings or attempts to bring into hatred or contempt, or excites or attempts to excite disaffection towards the Government estab­lished by law”.