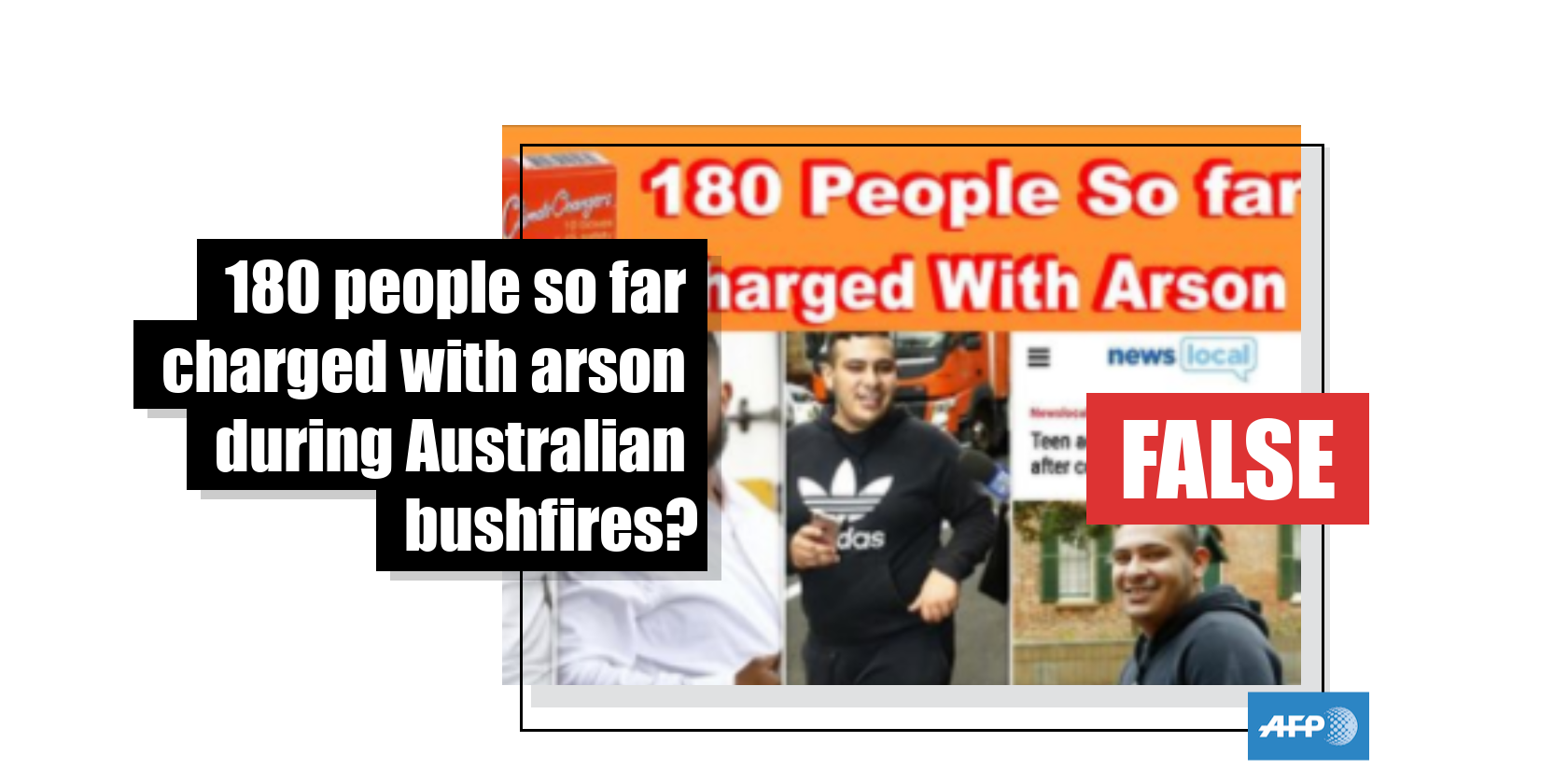 One Facebook post, published here on January 9, claims there had been “180 people so far charged with arson." It has been shared more than 600 times. 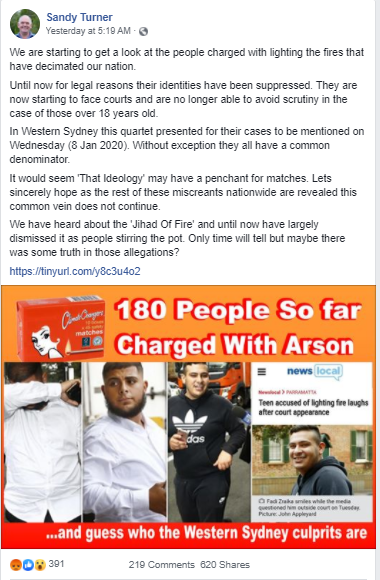 The misinformation on arson charges related to the bushfires, which have killed at least 27 people and destroyed more than 2,000 homes, was widely reported in the media.

The figure was published here by The Sun and here by Breitbart, a far-right US news website.

Other posts on Facebook were published here and here.

Police departments across Australia record bushfire-related offenses differently, with only some states parsing bushfire offences from total fire offences and Victoria not releasing any figures at all. Still, AFP reviewed all the publicly available police statistics and found far fewer than 180 people have actually been charged with arson specifically related to the current bushfires.

Below is a breakdown of the latest state figures:

In New South Wales, the state most devestated by recent bushfires, the police did announce that it took legal action against 183 people for bushfire-related offences since November 8, 2019.

However, just 24 people were charged for “deliberately-lit bushfires,” the police said in this press statement released January 6, 2020.

There is currently no available bushfire related police statistics from Victoria.

A police spokesperson told AFP by email that data on bushfire arson related offences and charges was only available up until September 2019, and new data would be released in March 2020.

The Queensland Police Service told AFP in a statement via email on January 10, 2020, that 109 people (36 adults and 73 juveniles) have been dealt with for offences relating to “recklessly and/or deliberately setting fires.”

Under fire bans, the lighting of all fires is prohibited and certain types of fires are restricted.

Of these, 114 fires have been deliberately or maliciously lit through human involvement, police said. These fires have been subject to police enforcement action including charging, restorative justice or cautioning, the force said.

In Western Australia, police told AFP that from November 25, 2019 to January 8, 2020 seven people were charged for deliberately lighting bushfires.

South Australia Police told AFP by email on January 10, 2020 that a total of 85 people have been arrested or reported for all fire offences since September 1, 2019. Of that, 10 were arrested for causing “a bushfire intentionally or recklessly.”

Below is a screenshot of the offences breakdown provided by police:

A Tasmania Police spokesperson said one person had been charged for unlawfully setting a fire on a total fire ban day on December 30.

“Bushfire offences generally come under ‘unlawfully setting fire to vegetation’, but this offence can also include less catastrophic fires (ie not limited to bushfires),” the spokesperson told AFP via email on January 10.

An ACT Policing spokesperson told AFP via email on January 14, 2020 that one person had been charged since September 2019 for lighting a grass fire.

The spokesperson added that from October 1, 2019 to December 31, 2019, another seven people were charged with arson offences, which included "structure fires, deliberately lit vehicle fires and grass/bushfires."