This video shows a presidential campaign rally in Buenos Aires in 2019, not Maradona's funeral

A video has been viewed hundreds of times on multiple Facebook and Instagram posts alongside a claim that it shows the funeral of football legend Diego Maradona, who died in November 2020, in Argentina. The claim is false; the clip actually shows a presidential campaign rally in 2019 in the Argentine capital of Buenos Aires.

The video has been viewed more than 200 times after it was posted on Facebook here on November 28, 2020. Translated to English, the Indonesian-language caption reads: “The Funeral of Diego Maradona in Argentina.”

A screenshot of the misleading post, taken on December 3, 2020

Tens of thousands of people in Buenos Aires bid farewell to Argentine football legend Diego Maradona, who died on November 25, 2020, at the age of 60, as reported here by AFP.

The video has been viewed more than 750 times after it appeared with a similar claim here and here on Facebook, as well as here on Instagram.

The Spanish-language tweet, translated to English, reads: “The largest political gathering since Alfonsin in 1983. Now what will the K’s media say about the lies in all Macri events? NOTHING IS LOST. EVERYTHING IS POSSIBLE IF WE TAKE CARE OF EVERY VOTE.”

“Alfonsin” refers to late Argentine president Raul Alfonsin, who was elected to office in 1983 and was the first civilian leader after the country’s eight years of military rule.

“Macri” refers  to Mauricio Macri, who served as Argentine president from December 2015 to December 2019.

Macri ran for re-election in 2019, and his campaign rally on October 19, 2019, attracted a massive crowd at the Obelisk monument in Buenos Aires, as reported here and here.

Below is a screenshot comparison of the video in the misleading post (L) and the Twitter video (R): 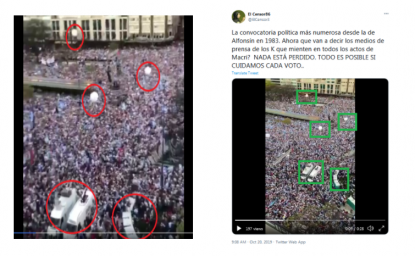 Below is a screenshot comparison of the video in the misleading post (L) and the AFP photo (R):

AFP previously debunked a claim that the video shows a protest against the current Argentine president, Alberto Fernandez, in June 2020.