This video shows a planned demolition of an illegal building in Hebei, China in 2017 -- nobody was reported to have died

A video has been viewed hundreds of thousands of times in multiple September 2019 posts on Facebook, YouTube, Twitter and Weibo which claim 76 people died after a building collapsed in Lanzhou City, China. The claim is false; the video has circulated online since 2017 in media reports about a planned building demolition in a different Chinese city; nobody was reported to have died.

The video was published repeatedly online, for example here on Facebook on September 14, 2018 where it has been viewed more than 314,000 times and shared more than 5,600 times. 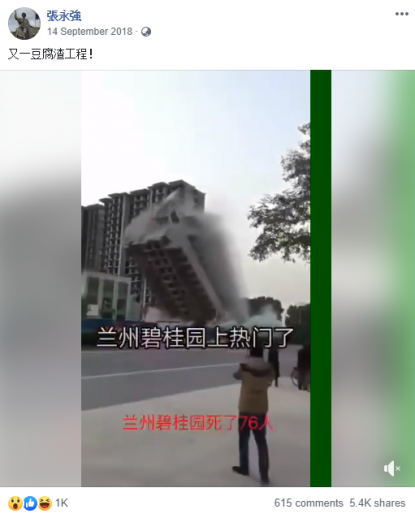 The 35-second clip shows a multi-storey building falling to the ground as onlookers watch from a neighbouring street. The same footage of the collapse is repeated four times in the video.

The post’s Chinese language caption translates to English as: “Another shoddy project!”

Lanzhou is the capital city of the northwest Chinese province of Gansu.

Country Garden is a property developer based in China.

The same video was also published on YouTube here, here and here; and Twitter here and here, also here on Weibo, with a similar claim.

The claim is false; the video has circulated in media reports since 2017 about a planned building demolition in a different Chinese city; nobody was reported to have died.

A keyword search found this November 13, 2017 Weibo post published by the verified account of Network Security Detachment of Public Security Bureau in Baoding. 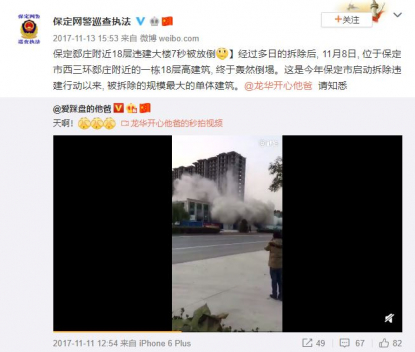 Baoding is a prefecture-level city located in Chinese Hebei Province.

The post includes the same video of the building collapse.

The simplified Chinese language caption translates to English as: “An 18-Storey illegal building near Qiezhuang, Baoding was demolished in seven seconds.

“After several days of demolition, on November 8, an 18-storey building near Qiezhuang, West Third Ring of Baoding City eventually collapsed. This is the largest single building demolished since Baoding started demolishing illegal construction this year. @龙华开心他爸 please learn about this.”

Below are three screenshot comparisons of the video in the misleading posts (L) and the Weibo post published by Baoding’s public security bureau (R): 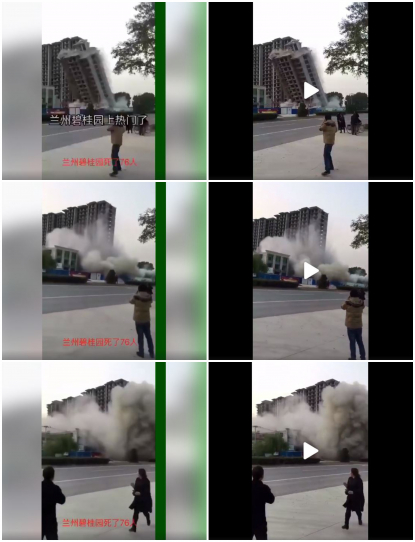 The post’s simplified Chinese language caption translates to English in part as: “After that, our journalist interviewed the Law Enforcement Bureau of Jingxiu District, Baoding City, and the representative confirmed with our journalist that the building was demolished in the afternoon of November 8, 2019 at 16:46, and that person briefly introduced the process of the demolition.

“According to the representative, professional demolition company was asked to be involved. And first of all, the structure of the building should be cleaned up until the main load-bearing pillars are left, then the direction and scope of dumping would be calculated. And after the load-bearing pillars are precisely cut by professional equipment, the building could collapse towards one direction, which is similar to directional blasting.

“It’s acknowledged that the 18-storey high building is located in Xuzhuang Village, Jiangcheng Country, Jingxiu District, west of the Third Ring, and is named Huafu Zhiyuan. The record shows that the residential estate was developed and constructed by Xuzhuang Village Committee in Jiangcheng Country, without any relevant procedures. From November 3, the relevant departments started to demolish this building.” 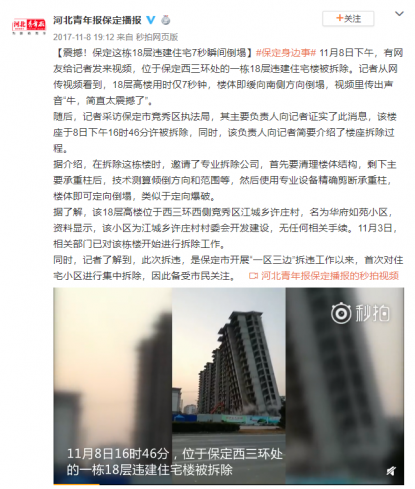 The building was located here according to Baidu maps.

An earlier November 4, 2019 demolition Weibo post by the same official media account can be seen here, mentioning the same building demolition in the caption that goes partly as: “On November 4, journalist saw on the demolition scene that the 18-storey building has been finished in its main part, without outside decoration. An excavator was demolishing the first to fifth floors of the building. It is estimated that the demolition area will be about 30,000 square meters.” The third picture contained in the post shows the according scene.

Below is the third picture from the November 4 Weibo post: 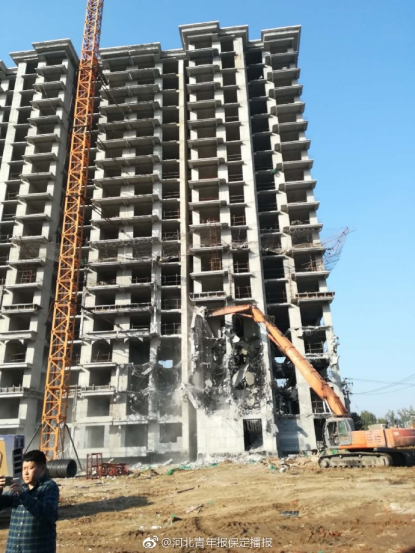 The misleading video has been previously debunked by Chinese fact checking media platform such as Jiaozhen and  Shanghai Network Fact Check here and here, and regional news sites in China such as Linhai Online here.