A video has been viewed hundreds of thousands of times on Youtube and Facebook alongside a claim it shows that Philippine television network ABS-CBN is “confirmed” to be closing down. The video is being presented in a misleading context; the footage is actually spliced clips of president Rodrigo Duterte and broadcaster Ben Tulfo ranting against the network. The network’s franchise is due to expire in 2020 but as of September 2019, there were multiple bills pending in the Philippine Congress to renew it. 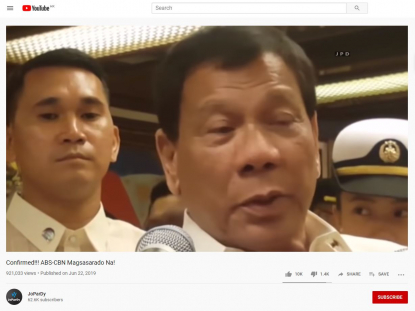 The video’s Tagalog language title translates to English as: “Confirmed!!! ABS-CBN To Close Down!”

A Tagalog speaking journalist in AFP’s Manila bureau analysed the video. The content of the video does not bear out the claim in the title.

The first clip, between the 0:00 mark and the 1:23 mark, shows Duterte saying “yes” when asked if he is going to block ABS-CBN’s franchise renewal; it has been taken from this Rappler video published on YouTube on April 27, 2017 with the caption, “Duterte to block renewal of ABS-CBN franchise.”

Below is a screenshot comparison of the misleading video (L) and the Rappler video (R):

The second clip, between the 1:24 mark and the 2:36 mark, shows Tulfo talking about allegations ABS-CBN owners have unpaid debt to the government; it is from an August 6, 2018 episode of Tulfo’s show Bitag.

The third clip, between the 2:37 mark and the 8:30 mark, shows Duterte saying he would “object” to ABS-CBN’s franchise renewal; it is from the state-run RTVM showing a November 8, 2018 Duterte speech in Boracay Island in Central Philippines.

Finally, the fourth clip, which appears between the 8:31 mark and the 10:44 mark, shows Duterte again saying he will “oppose” the franchise renewal; it is from RTVM showing a media interview also in Boracay on November 8, 2018.

Broadcast networks in the Philippines need a congressional franchise in the form of a law to be able to operate, as highlighted in this document published by global legal information resource Getting the Deal Through on page 366.

The network’s franchise expires in 2020 according to this press statement.

Duterte has threatened to block the network’s franchise renewal as reported here by ABS-CBN on November 8, 2018.

This photo does not show Malaysian leader Mahathir Mohamad’s younger brother, but an Indian government minister who is not related to him