An online report shared on Facebook hundreds of times claims lawmakers in the Philippines have decided not to renew the operating licence of popular broadcaster ABS-CBN. The claim is false; four bills that propose renewing the licence are currently pending in Congress.

The online report, published here on August 13, 2019, claims that a Philippine House of Representatives committee has rejected a bill renewing the franchise of Alto Broadcasting System-Chronicle Broadcasting Network (ABS-CBN), the biggest media network in the country.

Below is a screenshot of the online report: 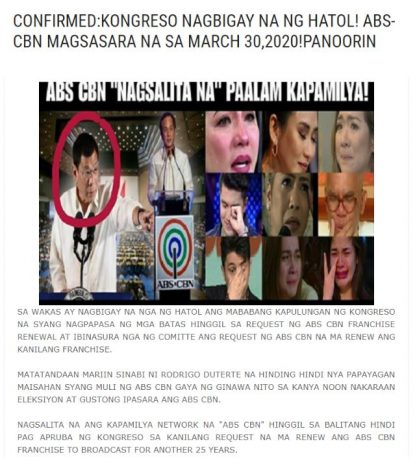 The headline, when translated to English, says: “CONFIRMED: CONGRESS ALREADY GAVE ITS VERDICT! ABS-CBN WILL CLOSE DOWN ON MARCH 30,2020! WATCH”

“IT CAN BE RECALLED THAT RODRIGO DUTERTE HAS FIRMLY SAID THAT HE WILL NEVER ALLOW ABS-CBN TO DECEIVE HIM AGAIN LIKE THE WAY IT DID IN THE PAST ELECTIONS AND THAT HE WANTED ABS-CBN TO BE CLOSED DOWN.”

“THE KAPAMILYA NETWORK ABS-CBN HAS SPOKEN ABOUT THE NEWS ON THE CONGRESS' FAILURE TO APPROVE THE REQUEST OF ABS-CBN TO HAVE THEIR FRANCHISE RENEWED FOR ANOTHER 25 YEARS.”

A video accompanying the report repeats the claim that the broadcaster will shut down.

The report was shared on Facebook here, here and here.

In the Philippines, a bill is passed by both houses of Congress, the House of Representatives and the Senate. It is then submitted to the president, who can either sign it into law or veto it. A bill passes into law if the president has not acted on it after 30 days.

President Rodrigo Duterte has threatened to object to the renewal of ABS-CBN’s franchise following the network’s alleged refusal to air his campaign ad during the 2016 presidential elections.

The House of Representatives did not act on a November 2018 bill which sought the renewal of ABS-CBN’s franchise.

However, a search of the legislative documents in the official website of the House of Representatives showed that four bills for the renewal of ABS-CBN’s franchise were filed during the current congressional session, which runs until 2022.

All four bills are still pending.

This video of an alleged shoplifting incident was filmed at a supermarket in London, not Sydney

This video of an alleged shoplifting incident was filmed at a supermarket in London, not Sydney