A video of a crowd outside an airport in the Indian state of Assam has been viewed thousands of times in multiple Facebook posts alongside a claim it shows people shouting pro-Pakistan slogans at a local politician. The claim was widely amplified by local media and politicians from India's ruling Bharatiya Janata Party (BJP). The claim is false; closer analysis of the footage reveals it shows people shouting slogans in favour of a local politician; the All India United Democratic Front, whose politician features in the video, also refuted the claim; Assam police filed a complaint against a BJP politician who amplified the false claim.

The one-minute 16-seconds clip was published on Facebook here on November 6, 2020.

Badruddin Ajmal is the founding leader of the All India United Democratic Front (AIUDF) political party based in Assam, where the town of Silchar is located.

The footage was also shared on Facebook alongside an identical claim by local Assamese newspaper The Cachar Times here and The Barak Valley web portal here.

Closer analysis of the video shows the crowd was in fact chanting “Long live Aziz Khan” and “Long live Aziz brother” in support of Aziz Khan, a local AIUDF politician. The slogans can be heard at the video's 3-seconds, 37-seconds and 44-seconds marks.

Ajmal was greeted outside the Silchar airport by Aziz Khan and several other local AIUDF leaders. The politicians were surrounded Indian paramilitary forces and local police.  Below is a screenshot of the paramilitary personnel (marked A) and Assam police (marked B). 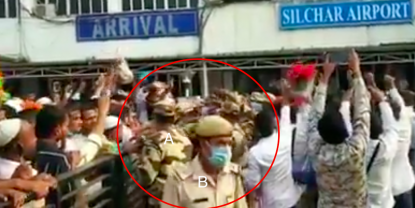 Several longer videos were also recorded outside the airport and published on Facebook here and here by AIUDF supporters.

One of the post's Assamese language caption translates to English as: “Welcoming Mr Badruddin Ajmal at the Silchar airport.”

The four-minute 48-second video shows people cheering both Khan and Ajmal. At no point does anyone raise pro-Pakistan slogans.

AIUDF also issued a statement on Twitter here on November 6, 2020, accusing the media and the BJP of distorting the slogan “Long live Aziz Khan” to “Long live Pakistan.”

Press Statement by AIUDF on cheap politics by BJP, how they along with a section of media distorted the slogan 'Aziz Khan Zindabad' into 'Pakistan Zindabad'. pic.twitter.com/obzPASSLNg

Assam police filed a complaint against a BJP politician for sharing the video with a "misleading claim" on his official social media, as reported here by Press Trust of India news agency and English newspaper The Times of India here on November 11, 2020. 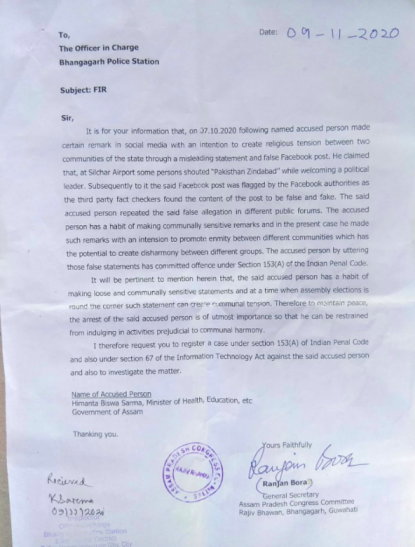