A video that shows a huge crowd on a railway station platform has been viewed thousands of times in multiple posts on Facebook and Twitter that claim the scene was filmed in the Indian city of Kolkata in November 2020. The posts claim train passengers breached social distancing guidelines following the resumption of local railway services. The claim is false; the video has circulated online since September 2018 in reports about police exam candidates at a train station in the northeastern Indian state of West Bengal.

The two-minute clip was published here on Facebook on November 18, 2020. 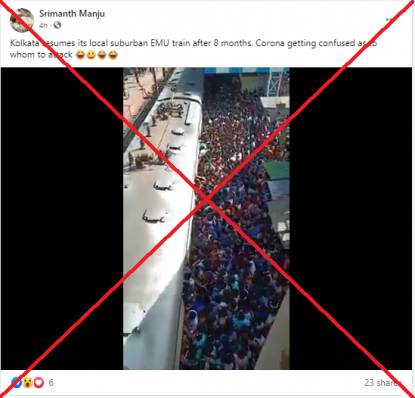 The video caption states: “Kolkata resumes its local suburban EMU train after 8 months. Corona getting confused as to whom to attack.”

Kolkata is the capital city of the northeastern Indian state of West Bengal. According to this report by Indian newspaper The Hindu, local suburban train services in the city resumed on November 11, 2020 after a seven-month hiatus caused by the novel coronavirus pandemic.

A reverse image search using keyframes extracted from the video in the misleading post found an identical clip published here on Facebook on September 23, 2018.

“Today is the test of the West Bengal Police Constable, and it was a battle to reach the test center. See what happens if you take the exam in one day. The government should think of alternatives to avoid holding the exam in one day. It causes a lot of problems for the common examinees. Please suggest ideas for alternatives. Ranaghat station. Video- #Sumanta Kumar Nath.”

Sumanta Kumar Nath, credited as the source of the video in the 2018 Facebook post, previously told AFP he filmed the clip at Ranaghat Station, in reference to another misleading claim about the same video debunked by AFP in November 2018.