A video has been viewed tens of thousands of times in multiple Facebook and Twitter posts alongside a claim it shows protesters harassing Muslims in France in October 2020 after they prayed in the street. The claim is misleading; the video shows Paris residents protesting against Muslims holding Friday prayer in the street in 2017.

The four-minute 11-second video was published on Facebook here on October 31, 2020. The post has been shared more than 3,600 times. 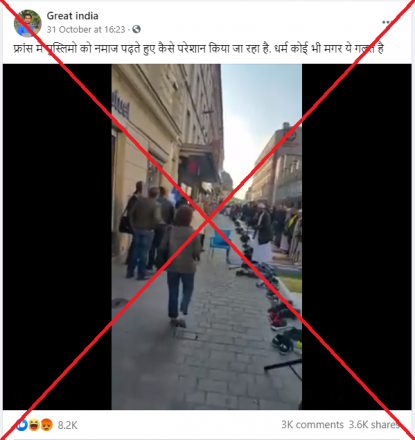 The post’s Hindi-language caption translates to English as: “This is how the Muslims are being harassed in France while offering prayers. It does not matter what the religion is, but this is wrong.”

The post circulated online in late October 2020 after some Muslim countries called for a boycott on French goods following comments by French President Emmanuel Macron.

Macron defended the right to criticise Islam as part of freedom of speech after the beheading of a French teacher in a Paris suburb who showed cartoons of Prophet Mohammed to his class, AFP reported here.

A reverse image search on Google with video keyframes extracted from the footage found the same clip was published on YouTube here on January 8, 2018.

Further Google searches found reports by French newspaper 20 Minutes and the French edition of European news site The Local that stated the incident happened in November 2017 in the Paris suburb of Clichy. According to the reports, local politicians led a march against the Muslim community observing Friday prayer on the street.

“A French mayor and dozens of other MPs and elected councillors from around the Paris region sang the Marseillaise on Friday as they marched towards around 200 Muslim worshippers in a bid to stop them praying in the street,” read the report from The Local published on November 10, 2017.

The Associated Press (AP) news agency also published a video report on the protest on YouTube here on November 15, 2017.

Below is a screenshot comparison of the video published in the misleading posts (L) and the AP’s video report (R) with similar elements highlighted in red by AFP: 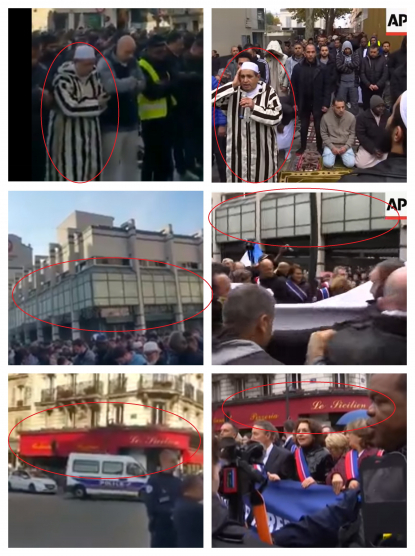