Skip to main content
Election workers extract mail-in ballots from their envelopes and examine the ballot for irregularities at the Los Angeles County Registrar Recorders' mail-in ballot processing center at the Pomona Fairplex in Pomona, California, October 28, 2020. - Officials relocated mail-in ballot processing to the expansive location due to the need for COVID-19 social distancing for the ballot workers and the large number of mail-in ballots. While the tabulation of votes cast for Donald Trump and Joe Biden will begin when polls close on November 3 at 8pm, envelopes are now being sorted and signatures and ballots verified to expedite the tabulation process on November 3. (Photo by Robyn Beck / AFP) (AFP / Robyn Beck)

An image of a Chinese courier service package at a ballot count in the US state of Georgia during the 2020 presidential election has been shared in multiple Korean-language Facebook posts. The posts claim the image is evidence of Chinese inference in the 2020 election because, they claim, all mail-in ballots are required to be returned by the United States Postal Service (USPS). The claim is misleading; the US Department of State website states that voters abroad can use any “professional courier service” to deliver their ballots; as of November 11, officials in Georgia have said they have found no evidence of widespread election fraud, according to US media.

The claim was published here on Facebook on November 6, 2020 alongside a photo of a poll worker handling a package with the logo of Chinese courier SF Express.

The post features a screenshot of a Weibo post, with Chinese text that translates to English as: “The 59th US presidential election ballots are still being counted now. It's the 4th November in the U.S., and based on the live-stream from USA TODAY, a delivery package from SF Express appeared and many netizens are talking about it. @SF Express International customer service mentioned that SF express packages can only delivery to the U.S. from China but they do not support deliveries within the U.S.” 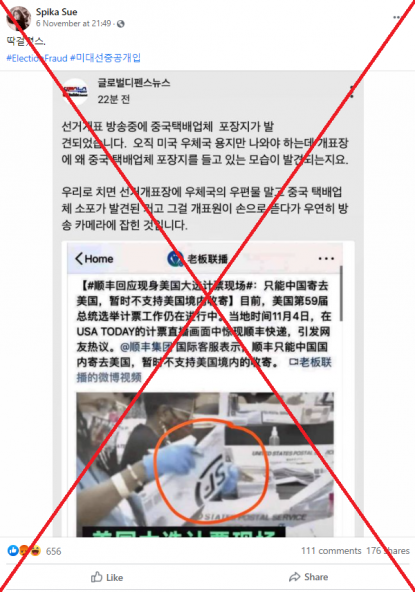 The post states: “Exposed. #ElectionFraud  #Chinese intervention in the US election”.

Voters in the US went to the polls on November 3, 2020 to elect their next president. As of November 11, incumbent Donald Trump is yet to concede, but many world leaders have congratulated Joe Biden and running mate Kamala Harris after the Democrats were declared winners at the weekend. Here is an AFP report on the election.

Identical images were also shared here, here, here and here on Facebook, alongside a similar claim.

According to the US Department of State website, US citizens abroad can return their ballots using either “local mail” or “express courier services.”

It states, in part: “Overseas voters have a number of options for returning completed ballots:

“Local mail – If you have a reliable mail service to the United States, put your ballot in the mail with appropriate international postage.

“Express Courier Service – If time is short or local mail unreliable, you can use professional courier services such as FedEx, DHL, or UPS at your own expense. NOTE: FedEx does not deliver to P.O. boxes.”

Below is a screenshot of the relevant section of the website: 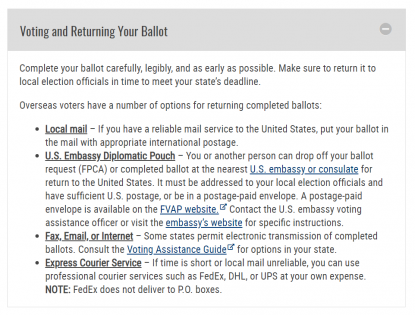 The Federal Voting Assistance Program (FVAP), a group tasked with aiding US citizens and military forces abroad during elections, also noted here that a “foreign mail system” and a “common carrier” can be used to return ballots.

FVAP said here that use of a “private courier” is permitted and recommended in order to ensure a timely delivery.

A Google reverse image search found the image in the misleading posts was a screenshot from this November 5, 2020 livestream of vote counts published on the YouTube account of US newspaper USA Today.

Below is a screenshot of the livestream at its 5:39:34 mark: 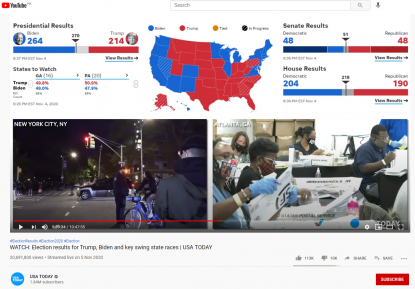 The strapline across the video indicates that it shows ballot counters in the city of Atlanta, which is the capital of Georgia state.

Below is a screenshot comparison between the image in the misleading posts (L) and the USA Today video (R):

As of November 11, 2020, there have been no credible reports of widespread voter fraud in Georgia, according to US media.

This report by US broadcaster CNN published on November 10 quotes Georgia's Lieutenant Governor Geoff Duncan, a Republican, as saying there have been no "substantial instances" of voter fraud in the state.

This video report by Fox5Atlanta published on November 10 includes comments from Georgia Secretary of State Brad Raffensperger, who says: "We have not found any widespread voter fraud".