Skip to main content
A woman waits for a bus in a shelter booth designed to protect passengers from monsoon rains, summer heat and the COVID-19 coronavirus in Seoul on August 12, 2020. - Automatic temperature checks before entry, sliding doors and an air-conditioning system equipped with ultraviolet disinfection lamps -- welcome to high-tech South Korea's latest front in the battle against coronavirus: the bus shelter. (Photo by Jung Yeon-je / AFP) (AFP / Jung Yeon-je)

Multiple Korean-language posts published on various social media platforms in November 2020 claim that South Korea’s Seoul Metropolitan Government has introduced a new scheme that allows bicycles on all buses. But the claim omits important context; Seoul introduced the scheme on October 26, 2020 on a two-month trial period across select bus routes; the city has said it will only consider making the scheme permanent in 2021 after assessing feedback.

It features seven screenshots of a news report by South Korea’s TBS television network. The strapline in the first screenshot reads: “People can board buses with bicycles from the 26th”. 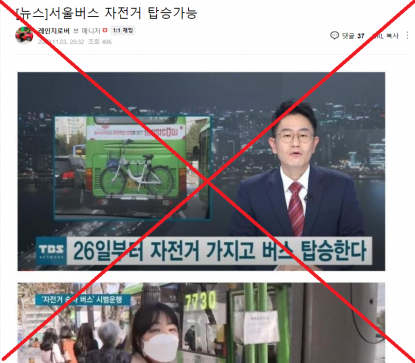 Some of the comments on the post expressed discontent at the local government’s implementation of the scheme.

One user wrote: “This is difficult in a country like ours where there’s a culture to do things as quickly as possible… Seoul Metropolitan Government seems to be implementing many weird policies lately”

Another commented: “This looks problematic! They’re implementing this without a trial run!”

Screenshot of comments on the misleading post, captured November 10, 2020

The claim, however, omits important context; the scheme was introduced for a two-month trial period and only covers five bus routes in the city.

A reverse image search found the screenshots in the misleading post match this video published on the YouTube account of South Korean broadcaster TBS, dated October 26, 2020. 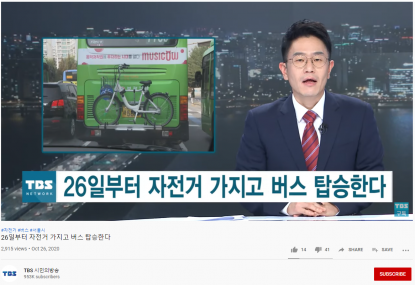 Screenshot of the TBS YouTube video, captured on November 10, 2020

The report states, in part: “Seoul City has started a test scheme that allows bicycles on buses, following its taxi and subway schemes.

“The trial will run across five bus routes that pass the Han River and other key tourist spots.”

The report also features a soundbite from Koh Ok-hui, an official overlooking bus policies at the Seoul Metropolitan Government, who says: “There may be complaints, because there is a chance of bus delays. We will look into this and take into consideration when discussing future expansion plans”.

A closer examination of the TBS video also revealed that its top strapline indicated the scheme was temporary: “‘Bicycles on buses’, a test run”.

Below is a screenshot of the TBS video, with the strapline circled in red by AFP: 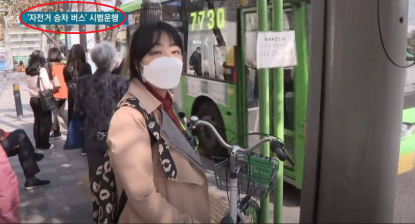 AFP located Seoul Metropolitan Government’s statement on the announcement of the new scheme here on its website, dated October 22, 2020. 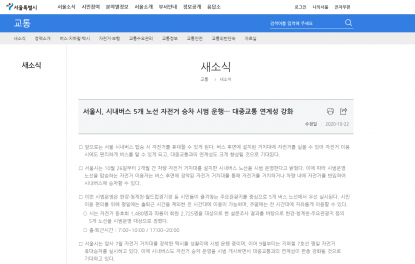 Part of the Korean-language statement translates to English as: “The Seoul Metropolitan Government announced on October 26 that it will run a two-month test scheme of buses fitted with bicycle stands. Cyclists who board these buses can either use the bike stands on the back of these buses or board with their bicycles.

“This test run will first apply to five bus routes circling popular tourist spots, such as the Han River, Cheonggyecheon stream and the Seoul World Cup Stadium. For the convenience of those involved it may be used during all hours except during rush hour on weekdays and on all hours on weekends.”

It added that the city will seek feedback from the public to “assess possible expansion into other routes from early 2021”.