A video of an Indonesian opposition politician standing in front of the Indonesian parliament building in Jakarta has been viewed thousands of times on Facebook alongside a claim that it shows him at a students’ demonstration on September 24, 2019. The claim is false; the video shows the politician at a different protest nearly two weeks before the students’ rally.

The two-minute and 17-second video was published here on Facebook on September 24, 2019, where it was viewed more than 6,900 times and shared more than 130 times before it was removed.

The post’s Indonesian-language caption translates to English as: “It turns out they are infiltrators of the students’ demonstration in front of the House of Representative building, and in this video they convey their true goal. Sri Bintang still wants to be a star

“They asked the people to reject Jokowi’s inauguration as president.

“Sri Bintang ‘We topple down the cheating president-elect.’” 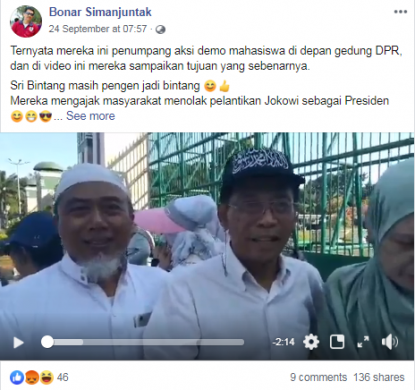 Thousands of Indonesian students protested at the parliament building against a proposed new criminal code on September 24, 2019, as reported by AFP here.

The video was also published on Facebook here, here, and here and on Twitter here with a similar claim.

The claim is false; the video shows Sri Bintang at a rally in front of the parliament building in mid-September 2019, almost two weeks before the students’ protest.

A keyword search on Google found the same video published here on YouTube on September 11, 2019.

“212” refers to the supporters of the Islamist massive protest that was held on December 2, 2016, to unseat the Christian Chinese governor of Jakarta, Basuki T. Purnama.

Sri Bintang was among the 212 supporters who were arrested in December 2016 for alleged treason.

Sri Bintang is circled in red by AFP.

Sri Bintang said that he would join a rally organized by the Indonesian Revolution Front at the parliament building in Jakarta on September 11, 2019, according to this CNN Indonesia report.

The Indonesian Revolution Front is Sri Bintang’s political organization, according to this report published by Indonesian news magazine Gatra.