A video has been viewed hundreds of thousands of times on Facebook, Twitter and YouTube alongside a claim that it shows Rizieq Shihab, leader of the Islamic Defenders Front, receiving an award "from Malaysia". The claim is misleading; the footage actually shows Indonesian magazine Moeslim Choice giving an award in 2018 to Rizieq, who was reportedly in self-imposed exile in Saudi Arabia at the time. 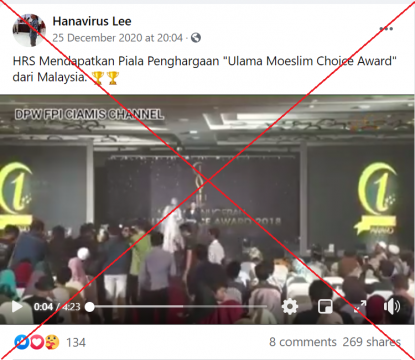 The caption of the Indonesian-language post translates to English as: “HRS Received the ‘Muslim Cleric Moeslim Choice Award’ from Malaysia.”

HRS is an acronym for Habib Rizieq Shihab. Habib is an honorific title used to refer to Muslim scholars believed to be descendant of the Prophet Muhammad.

Rizieq Shihab was leader of the Islamic Defenders Front, a Muslim group that was banned by the Indonesian government on December 30, 2020. The ban came just weeks after Rizieq was arrested for allegedly violating Covid-19 protocols.

A combined reverse image and keyword searches on Google found the original footage posted here on the YouTube channel of MOESLIM CHOICE TV on December 18, 2018.

Below is screenshot comparison between the video in the misleading post (L) and the Moeslim Choice TV footage (R): The first two sentences of the report read: “Because he is regarded as a representation of the Islamic struggle, the Islamic Defenders Front Great Leader Habib Rizieq Shihab was awarded MoeslimChoice Muslim Cleric Award.

Rizieq, who left Indonesia in 2017, was in self-imposed exile in Saudi Arabia at that time. He returned in November 2020.

The 2018 event in Jakarta and also reported by local media Suara.com and Warta Ekonomi.