A video of a Muslim preacher arriving in Indonesia’s Papua region has been shared repeatedly on Facebook and YouTube alongside a claim that the visit took place amid unrest in early September 2019. The video is being shared in a misleading context; the video was taken when the preacher arrived in Papua in September 2018.

The three-minute, four-second video was published in this Facebook post on September 2, 2019. It has been viewed more than 200 times. 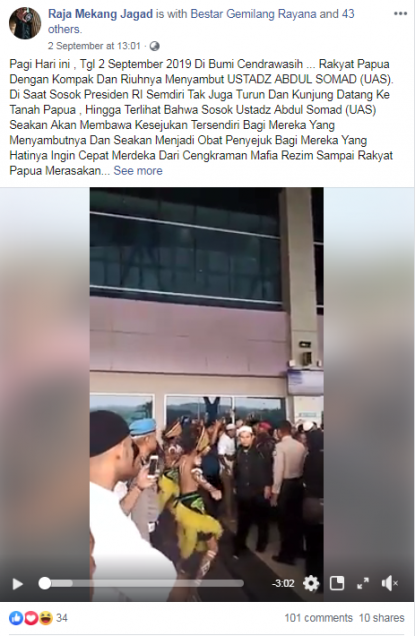 The Indonesian-language caption translates to English as: “This morning, on September 2, 2019, in the Land of the Bird of Paradise… the people of Papua unify and clamorously welcome Ustadz Abdul Somad (UAS). When the President of the Republic of Indonesia himself doesn’t come and visit Papua, so it is seen that Ustadz Abdul Somad (UAS) brings serenity to those who welcome him and as if he is a cure for peacefulness to those whose hearts want to be independent from the grip of the mafia's regime until the people of the Papua feel the independence.”

“The Bird of Paradise”, or cenderawasih, is a bird native to the island of Papua, as explained in this article published on the Indonesia’s Environment and Forestry Ministry website.

“The Land of the Bird of Paradise” is a nickname given to Indonesia’s Papua region.

A series of demonstrations and violence have rocked Papua since August 2019. AFP has reported on the recent unrest here and here.

The video was also published alongside on Facebook here, and on YouTube here with a similar claim.

The video is being shared in a misleading context; it was filmed during Abdul Somad’s visit to Papua in 2018.

A high-definition version of the video, which is also three minutes and four seconds long, was published in this Facebook post on September 22, 2018.

Sorong is a city in Indonesia’s West Papua province.

Below is a screenshot comparison between the video in the misleading post (L) and the genuine video (R): 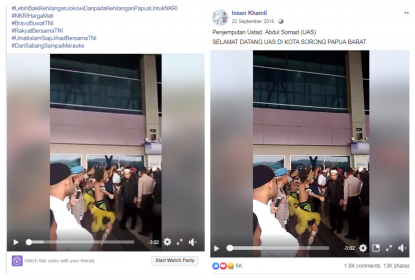 The scene captured in the photo, shown below (R), can also be seen at the 1:17 mark in the misleading Facebook video (L):

Abdul Somad’s arrival at the Sorong airport was also reported in this article published by Indonesian media outlet Tribunnews on September 22, 2018.