This image is from 2009 and shows calves killed in northwestern Sri Lanka in a local dispute.

An image of dead calves has been shared thousands of times in Facebook posts and newspaper articles that claim it shows the mass killing of animals to feed Muslims who were visiting Sri Lanka to attend a conference in 2019. The claim is false; the image in the post is from an incident that occurred in northwestern Sri Lanka in 2009.

The photo -- published here on Facebook on September 4, 2019 -- shows dead calves lying in a clearing as a group of people look on. Their faces are blurred.

Ranil Wickremesinghe is the current prime minister of Sri Lanka. 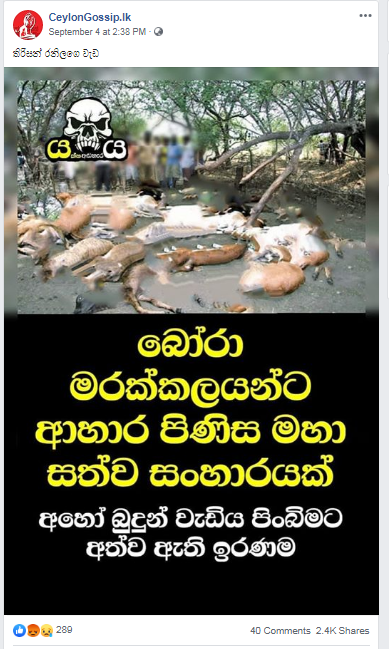 The Sinhala-language text across the bottom of the image translates into English as:

“Mass animal slaughter to feed the Bohra Muslims. Oh the fate that has befallen this Holy Land graced by Buddha"

Bohras are a Muslim sect that number around a million people worldwide, including a small community in Sri Lanka.

Similar claims have been made using the same image for example here on Facebook as well as in an English-language newspaper and a Sinhala-language news website.

These claims surfaced on Facebook just days after tens of thousands of Bohra Muslims arrived in Colombo to attend the annual Bohra conference -- held between the 1st and 10th of September this year, according to an AFP report.

A Google reverse image search of the photograph used in the post returned this article published on July 11, 2009 published in the local paper Dinamina. 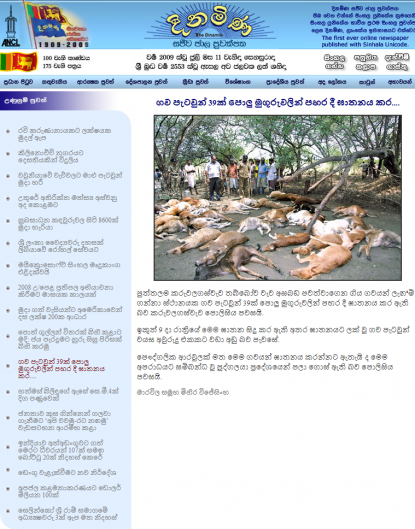 Screenshot of the Dinamina newspaper article.

The newspaper article headline in Sinhala translates to English as:

The article says the calves were found dead in a cowshed located close to the Tabbowa Wewa reservoir located in North Western Sri Lanka.

Below is a screenshot comparison of the image in the misleading post (L) and the image published in the 2009 article (R): 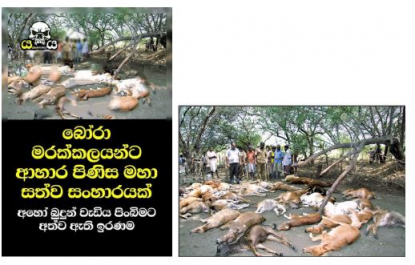 Here is the short article translated in full:

“The Karuwalagaswewa Police states that some 39 calves have been found beaten to death using poles and clubs in a cowshed located near the Thabbowa wewa in Karuwalagaswewa, Puttlam.

"The calves were killed on the night of the ninth and every calf was under one year old.

"The Police state the man who committed the act has fled the area and that it happened as a result of a personal conflict.”

Karuwalagaswewa is a village located in North Western Sri Lanka.

Colombo Municipal Council, Chief Municipal Veterinary Surgeon, Dr. I V P Dharmawardane told AFP by phone that no mass killing of animals took place in the days leading up to or during the Bohra conference.

“There is absolutely no truth to these claims. As per statutory by-laws, cattle cannot be slaughtered anywhere but the Municipal slaughterhouse. Permits are granted to slaughter animals in private premises but meat procured by such means is allowed only for private consumption.

“There has not been any increase in the number of permits sought to slaughter animals in private premises and neither has the municipal abattoir slaughtered more cattle than usual in the past few weeks or at present,” he told AFP.

The Butchers Ordinance Chapter 1, Section 14 refers to where and when animals must be slaughtered -- either at “a place appointed by the proper authority; or any public slaughterhouse”.

Below is a screenshot of Ch: 1 Sec 14 of the Butchers Ordinance: 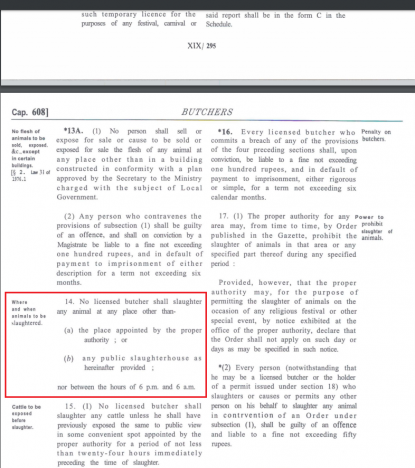 Screenshot of Ch: 1 Sec 14 of the Butchers Ordinance:

The Colombo Dawoodi Bohra community told AFP no cows were slaughtered and no meat had been illegally transported during the Dawodi Bohra convention of Ashara Mubaraka.

“The organizers have received all necessary approvals from the Government regarding the slaughter of animals and is using a Government slaughterhouse for procurements of meat. The transport of meat is carried out as per the Government regulations,” they said by email on September 5, 2019.