A provincial Pakistani government has not raised vehicle registration fees by more than 1,100%

Multiple Facebook posts claim that the Pakistani government will impose enormous new taxes on the registration of motorcycles and rickshaws in southern Sindh province. The claim is false; no new taxes have been levied, according to government websites; the federal taxation authority has said there are no plans to introduce the tax cited in the misleading Facebook posts.

This Facebook post includes a clip from a Pakistani TV news channel which has been viewed more than 35,000 times since July 24, 2019.

The post’s caption claims the Federal Board of Revenue (FBR), Pakistan’s tax authority, has instructed the Sindh provincial government to raise taxes on motorcycles and rickshaws.

The video's Urdu-language voiceover translates to English as: “For the registration of a 150,000 rupees rickshaw, 18,400 rupees will have to be paid as tax. The federal government has written a letter to the Sindh government to impose this tax.” 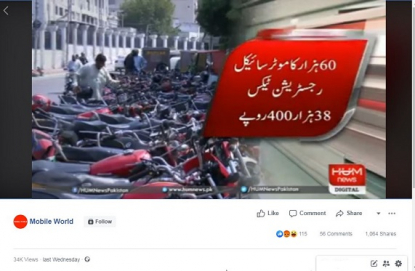 Although the news report suggests that the taxes will be increased in the future, many users shared the post under the impression that the new levies had already been introduced.

Many Facebook users appear to believe the claim in the post's comments section.

Abdul Waheed's comment in Urdu translates to English as: "Congratulations for the change to all my dear Pakistani brothers." 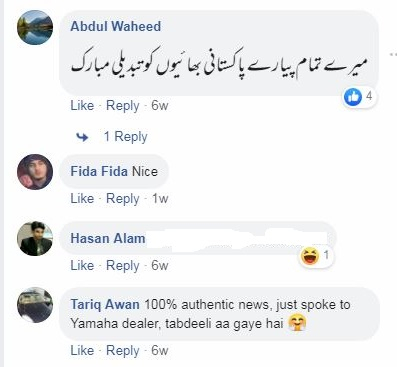 The same video accompanies this Facebook post which has a caption saying: “NEW TAXES ON REGISTRATION OF VEHICLES.”

An online report in Urdu also claims that the higher fees have been introduced.

The claim is false; no new taxes have been levied, according to government websites; the federal taxation authority has said there are no plans to introduce the tax cited in the misleading Facebook posts.

In a statement emailed to AFP on July 25, 2019, the FBR said that no new tax had been introduced on vehicles and there were no current plans to do so.

Part of the statement reads: “The news circulating about imposition of tax on Motorcycle and Auto Riksha (sic) by FBR is baseless and false. FBR strongly refutes this baseless news. Further, there is no suggestion under consideration to levy tax.”

Below is a screenshot of the FBR statement: 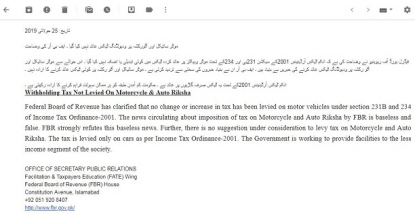 Screenshot of the FBR statement

As seen in the screenshot below, total registration charges on a motorcycle worth 60,000 rupees are 3,400 rupees -- not 38,400 rupees as suggested by the video in the misleading posts: 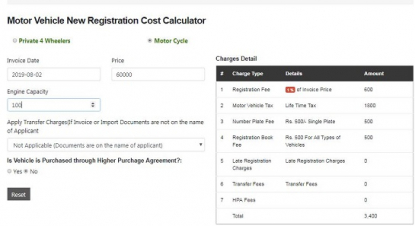 The video also claims that the registration cost of a 150,000 rupee rickshaw will rise to 18,400 rupees, but the official cost calculator shows the total charge is 7,000 rupees, as seen in the screenshot below: 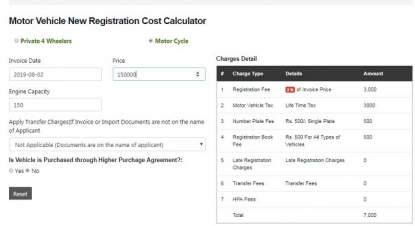