A video has been viewed tens of thousands of times in multiple Facebook posts alongside a claim it shows Indian security forces "clamping down" on a religious procession of Muslims in Indian-administered Kashmir in September 2019, after the state's special status was revoked. The claim is false; the video shows Indian security forces breaking up a religious procession in Indian-administered Kashmir in September 2018.

The two-minute, twenty four-second video was published here on Facebook on September 2, 2019. It has been viewed more than 58,000 times and shared more than 3,800 times.

The post's Hindi language caption translates to English as: “The Modi government is clamping down on the Muslim mourning procession, it is happening today in Kashmir and it will happen tomorrow anywhere, Khadim Raza.” 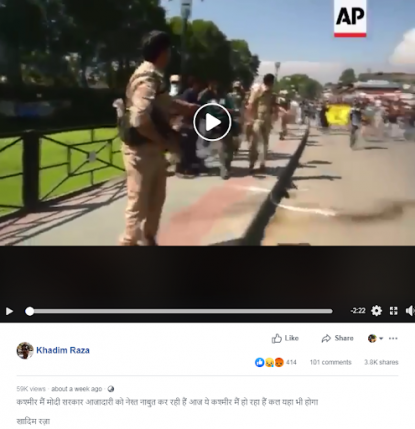 The phrase “Muslim mourning procession” refers to a religious gathering held during the mourning month of Muharram, when Muslims commemorate the death of Prophet Muhammad’s grandson.

The video has also been shared on Facebook here and here with a similar claim.

The claim is false; the video shows a religious procession in Indian-administered Kashmir in September 2018.

“(19 Sep 2018) Police in Indian-Controlled Kashmir fired tear gas to disperse Shiite Muslim mourners on Wednesday after they defied security restrictions and participated in a Muharram procession. Authorities in Srinagar, the region's main city, have imposed restrictions in many areas of the city to regulate large gatherings marking Muharram. Scuffles erupted when police tried to stop the marchers who were chanting religious slogans. Many mourners were detained by the police,” says the video description.

Below are three sets of screenshots of the video in the misleading Facebook posts (L) and the original Associated Press video (R): 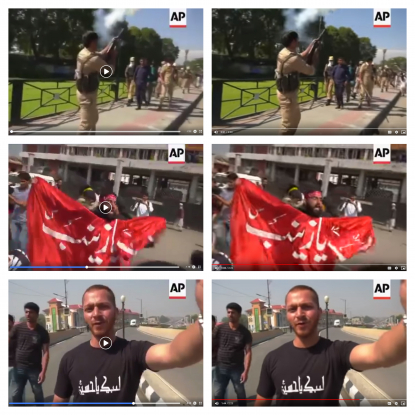 The Associated Press published this accompanying text report about the clashes.

As AFP reported here, at least two small protests did take place this year during Muharram -- on September 9 -- when several Shiite Muslims were detained. Police were also seen hitting mourners with bamboo sticks.