A doctored image of a CNN report has been shared hundreds of times in multiple Facebook posts which claim that the “president of Amazon” has asked Philippine President Rodrigo Duterte for help. The claim is false; the Amazon does not have a president; Duterte’s spokesman told AFP they had not received any requests for help from any of the countries affected by the fires in the Amazon rainforest; the doctored CNN screenshot was created by a meme generator.

The doctored image of a CNN report was published here in a Facebook post on August 27, 2019. It contains a purported screenshot of a CNN broadcast hosted by anchor Wolf Blitzer which combines a supposed photo of Duterte with a Breaking News ticker saying: “President of Amazon asked help from Rodrigo Duterte”.

Underneath the screenshot is text saying: “Why is this not being reported in Mainstream media?!” 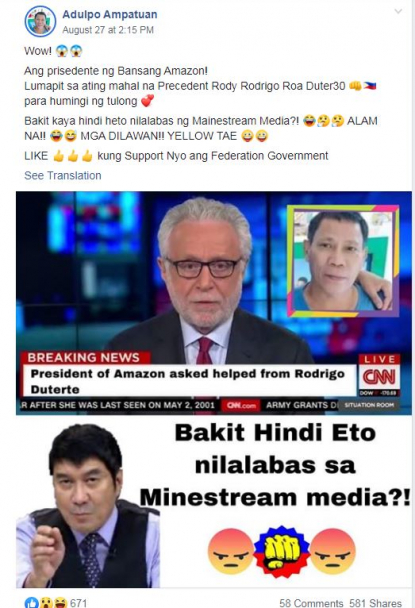 The misleading post’s Tagalog language caption translates to English as: “Wow! The president of the Country of Amazon!

“Why did the Mainstream Media did not report on this? WE KNOW WHY! THEY ARE YELLOWS!!! YELLOW SHIT

He is also known as “Rody”, and “Duter30” is used as a hashtag by his supporters on social media, for example here.

“Yellows” is a pejorative term used to describe the supporters and members of the Liberal party, the main political opposition.

The Federation government refers to the Philippines’ shift to federalism, which Duterte has pushed for.

The claim the Amazon asked Duterte for help is false. There is no country called “Amazon”.

The Amazon is an area spanning Brazil, Bolivia, Peru, Ecuador, Colombia, Venezuela, Guyana, Suriname and French Guiana, which contains “half of the planet’s remaining tropical forests,” according to the World Wildlife Foundation here.

Parts of the Amazon rainforest have been burning over the summer, prompting many countries to offer help. Here is an AFP report about the fires. 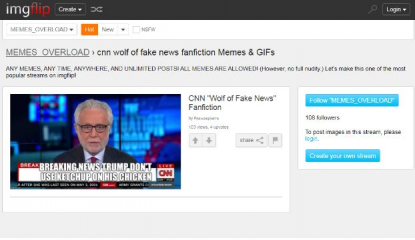 Presidential spokesman Salvador Panelo told AFP Duterte had not received any requests for help from the heads of any of the countries affected by the Amazon fire.

“None,” he said in a phone call on September 11, 2019 when asked this question: “Has President Rodrigo Duterte received any request for help from any of the countries affected by the fire in the Amazon?”