A Facebook post shared thousands of times claims proposed new anti-discrimination legislation in the Philippines will allow the government to defrock priests who object to same-sex marriage and ban parents from specifying the gender of their new-born child. The claims are false; none of the 13 bills covering sexual orientation and gender identity (SOGIE) currently pending at the Philippine Congress contain any such measures. 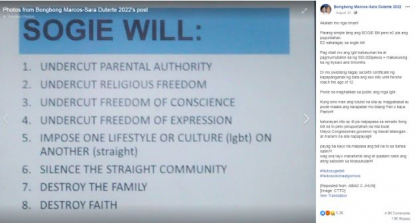 The post’s lengthy Tagalog language caption translates to English as: “What do you know!

“The SOGIE Bill may sound simple but this is what it leads to.

“If you ridicule the LGBT you will be charged and asked to pay a fine of 500,000 pesos + you will be imprisoned for 6 years and 6 months

“LGBT can kiss in public

“Whoever objects to them getting married can be stripped of their rights as a Priest or Pastor!!

“The fact of the matter is this bill was not yet passed at the senate but they're already going to each Mayor, Congressman, governor of each province…and they were able to convince them to agree with this!!

“are you amenable to having this bill passed in our country?!

“let us hopefully not just be silent and let public officials know our sentiments!!”

The SOGIE bills are a number of proposed measures to end discrimination based on sexual orientation and gender identity in the Philippines.

Altogether, 13 bills penalising discrimination based on sexual orientation and gender identity have been submitted in the current session of the Philippine Congress. One of the Senate bills filed penalises discrimination based on "ethnicity, race, religion or belief, sex or gender of sexual orientation,language disability and educational attainment".

Four have been submitted to the Senate: bill numbers 689, 159 , 412 and 315. Senate bill 315 prohibits discrimination based on SOGIE, ethnicity, race, language disability and educational attainment.

None of the three versions of the bill make any reference to banning the listing of sex on birth certificates.

None of the bills mentions same-sex marriage.

None of the bills contain provisions that would allow members of the clergy to be stripped of their positions for opposing same-sex marriage.

There are also no explicit provisions in the bills about LGBT people showing their affection in public.

Below are the following acts of discrimination based on sexual orientation and gender identity as defined in the bills:

Regarding the post’s claim that: “If you ridicule the LGBT you will be charged and asked to pay a fine of 500,000 pesos + you will be imprisoned for 6 years and 6 months”

All House bills and Senate bill 412 impose the penalties for hate speech or harassment of LGBT people, with fines of up to 500,000 pesos and jail terms of up to six years.