A video has been viewed millions of times in multiple Facebook posts which claim it shows a venomous snake inside a green pepper. The animal is real but the claim is false; the video actually shows a type of worm that experts say poses no risk to humans.

The Bengali language caption translates to English as: "Thinnest venomous snake inside the capsicum. Be careful before eating capsicum."

The two-minute five-second clip is shown in a screenshot below: 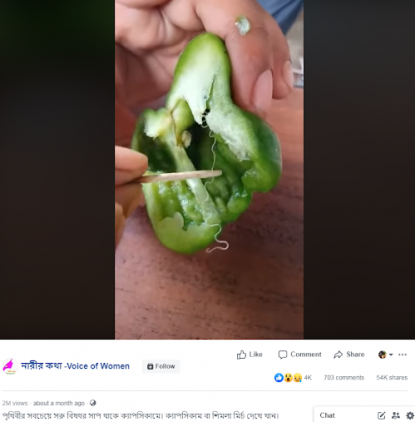 The same video has circulated since at least August 6, 2019 when it was posted on a YouTube channel that includes content from India.

Reporters in AFP’s New Delhi bureau confirmed the comments heard in the footage and written below are in Punjabi -- the official language in India’s northern state of Punjab. ​

A screenshot of the YouTube clip is shown below with the caption “Check Capsicum before cooking.. Thread worm..” 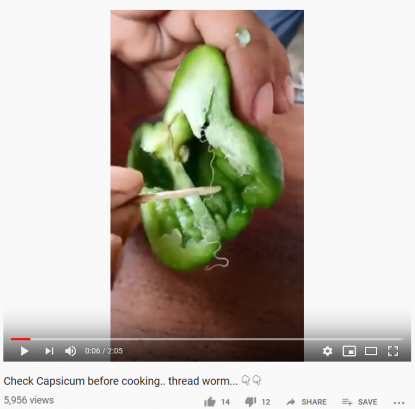 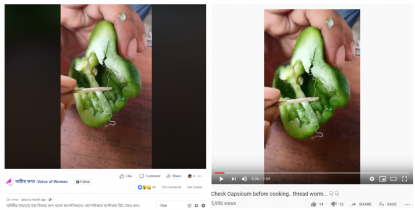 Some Arabic-language posts like this one referred to the animal is a nematomorpha -- or “horsehair” -- worm.

Maria Achinelly, a doctor of natural sciences and member of the Argentinian Parasitology Association, said the worm in the misleading posts corresponded with images of nematomorpha.

The “worm appears to be a nematomorpha or perhaps a nematoda of the mermithidae family. They share similar characteristics. To distinguish between them you would need to put them under a magnifying glass or microscope,” Achinelly said.

Nematomorpha mostly live in aquatic environments but can also be found in damp soil. They are parasites as larvae and live independently in water as adults.

Nematodes -- also known as roundworms -- are parasites that feed on animals and plants, or as “free-living” creatures in soil and water.

“Regardless which type of worm this is, the biology is similar -- they are worms… they are parasites that depend on insects and kill those that carry them,” Achinelly said.

“They are... able to parasite off cockroaches, lobsters, spiders, scorpions, but never animals like birds, reptiles, amphibians or humans… They are not dangerous to touch or ingest”, Achinelly added.

Sixto Raul Costamagna -- a parasite specialist -- suggested people “not be alarmed, and wash fruit and vegetables before eating them”, adding it’s best not to eat the worms as they could bring on allergies.

The misleading posts have been fact checked in English, Hindi, Spanish and Portuguese.