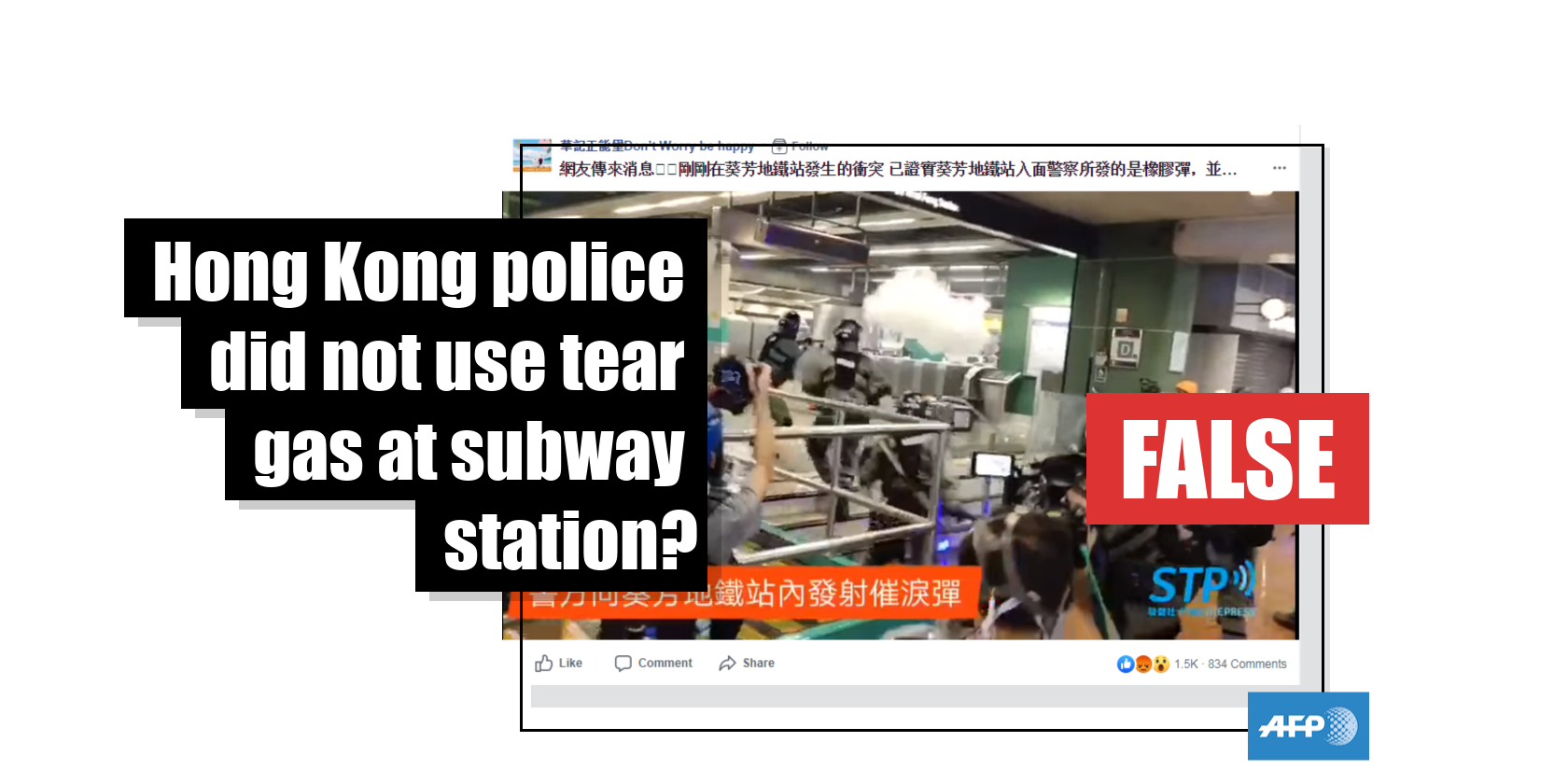 A video has been viewed tens of thousands of times in multiple posts on Facebook and Twitter which claim that Hong Kong Police did not fire tear gas at protesters in a subway station in Kwai Fong on August 11, 2019. The claim is false; a closer analysis of the video shows a police officer firing tear gas; police confirmed officers had fired tear gas at the station. 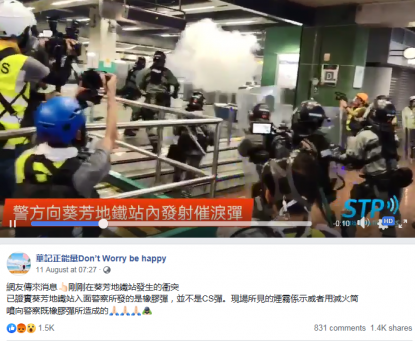 “The smoke on the scene was a result of protesters using fire extinguishers targeting police. Police were firing rubber bullets at the time”.

The video was shared the same day that thousands of pro-democracy protesters rallied for the tenth weekend in a row in Hong Kong. This AFP report gives details on the situation in Kwai Fong station on August 11.

The report states in part: “Protesters also faced off against police in the Kwai Fong train station, with the demonstrators using fire extinguishers and a water hose against riot officers who fired tear gas into the terminal.”

The same video was shared here and here on Facebook and here on Twitter with a similar claim.

The claim that police did not fire tear gas is false; an analysis of the video shows a police officer firing tear gas; police said they had fired tear gas at the station.

The video in the misleading posts includes the watermark for Sing the Press (STP), a Hong Kong news portal. STP published the video here on Facebook on August 11.

The 14 second video in the misleading posts shows a group of riot police entering Kwai Fong station. A group of protesters standing on the opposite side of the ticket barrier can be seen using a fire extinguisher, before one officer runs towards them and fires tear gas. The other officers follow the first officer, before they all move away from the ticket barrier.

Below is a screenshot of the sequence in the video with the officer holding the tear gas gun circled in red by AFP:

Below is a magnified screenshot comparison of the officer holding the tear gas gun in the STP video (L) next to this AFP image of a tear gas gun used during the protest on August 11 (R): 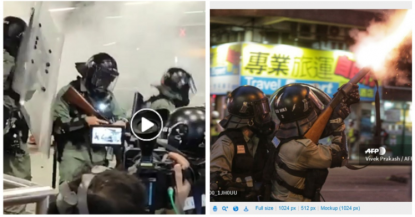 The Cantonese-language news report states, in part: “Police told us last night they had only fired rubber bullets, but not tear gas, inside the station, and that the smoke was caused by the fire extinguishers used by protesters.

“We asked again and police admitted having used both rubber bullets and tear gas. They said tear gas had not been fired when they responded to us last night.

“Checking our record, we made the inquiry about 9:30 pm last night, which was about 20 minutes after police fired inside the station.”

The comments in Cantonese by Senior Superintendent Kong Wing-cheung of Media Liaison and Communication, Police Public Relations Branch, can be heard at the 57 minutes and two seconds mark of the video.

His comments translate to English as: “Around 9:30 pm last night, members of the Emergency Unit New Territories South started a dispersal operation at the Kwai Chung Police Station.

“During the operation, officers passed by Kwai Fong MTR station, inside which at the time, as seen in various videos, was a large group of protesters.

“Some violent protesters targeted officers using slings and steel balls. They also lit smoke-producing material inside the station, so smoke was seen there. I must say their behaviours posed danger to other people at the station.

“We assessed firstly, the urgency of the situation and secondly, the fact that Kwai Fong MTR station, unlike other MTR stations, is not underground but semi-open.

“In order to resolve the crisis, our colleagues fired one shot of tear gas. Upon seeing the situation appeared to be under control and that there was no more attack, we did not fire a second shot.”