Candles and flowers are placed in front of Ned Peppers Bar after a mass shooting in Dayton, Ohio on August 5, 2019 (AFP / Megan Jelinger)

A meme shared thousands of times claims to show photos of the Gilroy, El Paso, and Dayton shooters, in order to point out their physical resemblance. One of the photos depicts the wrong man. The image said to show the Dayton shooter actually shows a 15-year-old Ohio boy who shares a name with the perpetrator and whose photo was stolen from his Twitter profile.

A collage of three close-up photos showing similar-looking young men has been shared thousands of times across social media in the past week. One of the various captions accompanying the montage on social media reads: “Gilroy shooter, El Paso shooter, Dayton Shooter... Notice a trend?” 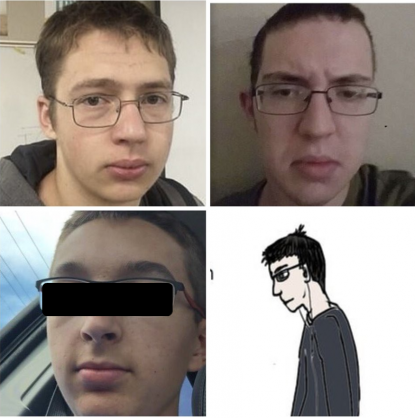 Screenshot taken on August 12, 2019 of a Facebook post, partly obscured by AFP to protect the identity of a minor

The post is referring to recent mass shootings perpetrated in the US cities of Gilroy, California, El Paso, Texas, and Dayton, Ohio, on July 28, August 3 and 4, respectively. In each instance, the shooters were young, white males who opened fire in public spaces, killing and injuring dozens of individuals.

However, the bottom left photo in the montage above does not show Connor Betts, the man who opened fire on the entrance of Ned Pepper’s Bar, leading to the death of ten individuals, including himself, and leaving 27 injured in Dayton, a city in the US midwestern state of Ohio. Betts was a 24-year-old male from the nearby city of Bellbrook, Ohio, who was shot dead by the police moments after opening fire on the crowd, according to this article from the Dayton Daily News.

Below is a photo of Betts released by the Dayton Police Department. A photo of Connor Betts, courtesy of the Dayton Police Department

Another young man from Ohio, also named Connor Betts, is still alive and is now having to face the repercussions of misidentification after someone stole a photo from his personal Twitter account and posted it online alongside photos of the Gilroy and El Paso shooters.

The misidentified Betts has since faced harassment online, despite the lack of resemblance between him and the now deceased 24-year-old male from the same state.

The middle school boy tweeted about the situation after the photo of him was wrongly shared, but the meme continued to circulate.

What was once his Twitter profile picture continued to be shared, despite him deleting it.

The superintendent’s office where Betts attends middle school confirmed to AFP that he had been the target of harassment and referred AFP to an article in the Sandusky Register, a local newspaper, explaining the event in detail.

The boy’s father told the paper that Twitter users continued to harass his son even after realizing he was not the Dayton shooter, because the boy had shared opinions favorable to US President Donald Trump on the social media platform.

The boy’s father reportedly said that the family has talked to an attorney to gauge whether legal action is needed. The family had not responded to AFP’s interview requests by the time of publication.

The photo of Santino Legan, the Gilroy shooter was pulled from an unverified social media account. AFP reached out to the individual who posted the photo, a self-described schoolmate of Legan’s, but had not received a response by the time of publication. The photo seems to match those released in press at the time of the shooting.

Patrick Crusius, the El Paso gunman, does look somewhat different in the photo released by the El Paso Police Department than from the Facebook photo used in the meme. However, a third photo from Crusius’ high school yearbook appears to bridge the difference in physical appearance, which is likely attributable to the difference in years between the photos.

The El Paso Police Department confirmed to AFP that it did not release the photo lifted from Crusius' Facebook page.