This video shows a Hindu festival, not people smashing idols because of Covid-19

A video shared hundreds of times on Facebook in South Africa claims that people in India are throwing away religious status  because the deities supposedly failed to protect them from the Covid-19 surge sweeping the country. But the claim is false: the clip dates back to 2015 - four years before the pandemic erupted in December 2019. It shows a ritual during a Hindu festival dedicated to the Hindu god Ganesh.

The video was shared here on Facebook on May 11, 2021, in what appears to be a news bulletin.

The narrator in the clip claims that a “large number of Indians” are throwing away statues of deities they worship because they could not protect them from the deadly surge of Covid-19. 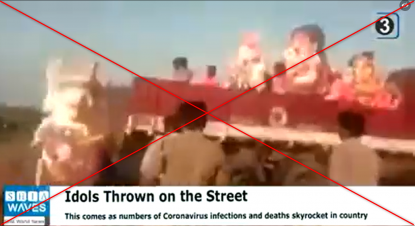 “Indians throw idols on the street because they could not save them from Coronavirus,” the caption of the Facebook post reads.

The video was also shared here and here on Facebook.

Video reposted as an online newscast

AFP Fact Check previously debunked the same video here in May 2020, but the clip has recently resurfaced online.

The logo for news website Shia Waves is visible in the left-hand corner of the video but AFP Fact Check found no record of the same video on its website. However, the site has a text story phrased in the same way as the segment readout in the Facebook video.

The footage has resurfaced while India is undergoing a deadly surge in Covid-19 infections.

By using the Invid-WeVerify tool to run reverse image searches on the video’s keyframes, AFP Fact Check traced the footage to social media posts from 2015.

The clip can be found here and here on Facebook in posts published on September 24 and 29, 2015, respectively.

Ganesha or Ganesh is the Indian “god of beginnings” who is traditionally worshipped before embarking on any major endeavor.

The timing of the two above Facebook posts suggests that they were released during or just after the 2015 Ganesh Chaturthi ritual.

The caption on the September 24, 2015 post written in Hindi identified the location of the river where the idols were being thrown as National Highway 44 in Telangana.

In May 2020, when the video first surfaced, AFP Fact Check found the bridge on Google Maps in Tungabhadra in Telangana, India.

Below is a side-by-side comparison of the picture on Google Maps (L) and an image from the original video (R).

Comparing the bridge seen in the Facebook video to the one on Google maps, we identified two visual clues: the black and white painted barrier and the reddish metal barrier.

When AFP Fact Check analysed the same video in May 2020, we found the bridge runs over the Krishna river. 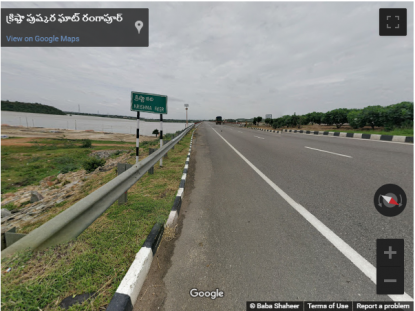 Screenshot of Google Maps showing the bridge, taken on May 17, 2021

Comparing the bridge in the video to the one on Google Maps, AFP Fact Check then noticed two visual clues that can also be seen in the current version of the video; the red barrier and the cylindrical white structure.

Screenshots of the false Facebook post image (L) and that of the Google Maps bridge image showing the red barrier and the white cylindrical structure, taken on May 17, 2021