Footage of an Islamic funeral procession has been viewed hundreds of thousands of time in multiple posts on Facebook and Twitter alongside a claim it shows the funeral of a Chechen man who was shot dead by French police after he killed French teacher Samuel Paty in a Paris suburb in October 2020. The claim is false; the footage shows a funeral procession of a man in Chechnya in August 2018.

The one-minute three-second footage was posted on Facebook here on November 3, 2020. It has been viewed more than 170,000 times. 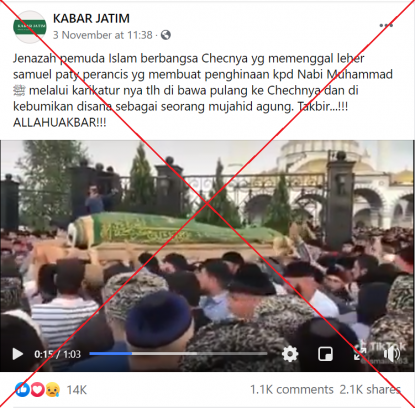 The post's Indonesian-language caption translates to English as: “The body of a Chechen Muslim youth who beheaded Samuel Paty, the French who insulted the Prophet Muhammad ﷺ through his caricature, was brought back to Chechnya and buried there as a great mujahid. Takbir ... !!! ALLAHUAKBAR!!!"

Mujahid refers to a person who strives or fights in support of Islam.

“Takbir” refers to the Arabic phrase “Allahu Akbar”, which means God is the greatest.

French police shot dead Abdullakh Anzorov, an 18-year-old originally from Chechnya, after he killed teacher Samuel Paty in a Paris suburb on October 16, 2020. Paty had showed cartoons of the Prophet Muhammad to his students during a class on free speech before he was killed, AFP reported.

The footage has also been viewed more than 300,000 times since it was posted alongside a similar claim on Facebook here, here, here and here; and on Twitter here and here.

The watermark seen in the clip corresponds with this TikTok post uploaded on October 25, 2020, by user @ismailov63.

A reverse image search on Yandex and keyword searches on Google found a similar video posted by Russian online magazine Spectrum on Facebook here on August 5, 2018, more than two years before Paty was killed.

The Russian-language post translates to English as: “Video: Funeral of Budanov’s killer

“The funeral of Yusup Temirkhanov, who in 2011 was found guilty of murdering former colonel Yuri Budanov, has been held in Chechnya.

"Tens of thousands of people attended the funeral, including Chechnya’s leader Ramzan Kadyrov.”

Below is screenshot comparison between the footage in the misleading post (L) and the video on Spectrum’s Facebook page (R):

The building in the video matches a Google user's image of Geldagan Mosque in Geldagan, Chechnya, tagged at the building's location on Google Maps.

The report's first paragraph reads: “On August 4, the funeral of Yusup Temirkhanov, who died in the colony after being convicted for killing the serviceman Yuri Budanov, was attended by the head of Chechnya, Ramzan Kadyrov. He declared Temirkhanov innocent of assassinating the officer.”