This video shows FBI agents raiding a private home, not a synagogue

A video has been viewed tens of thousands of times on Twitter, Facebook and YouTube alongside a claim that it shows the US Federal Bureau of Investigation (FBI) raiding a synagogue that was used to hoard face masks and other medical equipment. The claim is misleading; the raid took place at a private home in New York City, not a synagogue.

The two-minute 20-second video shows FBI officers moving boxes from a house into a truck. 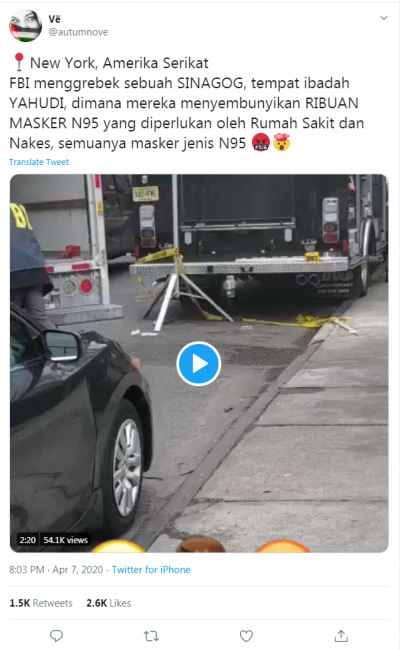 “FBI raided a synagogue, a Jewish house of worship, where they hid THOUSANDS OF N95 MASKS needed by hospitals and healthcare workers, all of the masks were N95.”

FBI stands for the Federal Bureau of Investigation, the US domestic security and intelligence agency.

The US Centers for Disease Control and Prevention (CDC) has recommended that the public wear cloth face coverings while reserving surgical and N95 masks for health care workers due to limited supplies.

The video in the misleading posts garnered more than 4,500 views after it was shared with a similar claim here, here, here, and here on Facebook; also here on YouTube.

The clip was also shared in English here and here with a similar claim.

The video was also shared with a similar claim in French here, where it has been viewed more than 40,000 times.

The claim is misleading; the raid took place at a private home in Brooklyn, New York City, not a synagogue.

“A Brooklyn man claiming to be infected with the coronavirus coughed on FBI agents who were investigating him for hoarding medical supplies, the US Attorney’s Office said Monday.

“Baruch Feldheim, 43, is facing charges of assault and making false statements to the feds on Sunday outside his Borough Park home where he allegedly peddled and stored massive amounts of N95 respirator masks, federal officials said.”

The LiveLeak video shows a scene which corresponds with this video published on April 2, 2020, on the YouTube channel of Canadian broadcaster CTV News.

The title and the caption of the CTV video reads: “FBI bust man charged for allegedly hoarding masks, selling at 700% mark up.”

The CTV News video also identifies the suspect as Baruch Feldheim and says he was arrested at his house in Brooklyn, New York City.

Below is a screenshot comparing the clip in the misleading post (L) and the CTV News video (R), with same features circled in red by AFP: 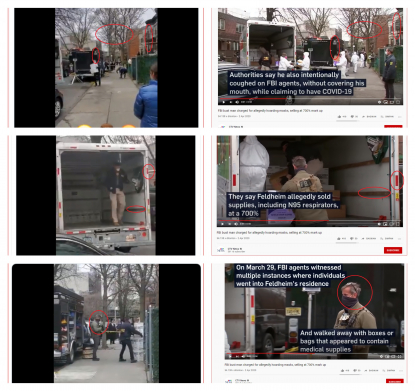 The location of the raid can be seen on Google Street View here.

The US Department of Justice issued this press statement about the case on March 30, 2020, stating Feldheim was arrested at his “residence”.