A video viewed thousands of times in Nigeria and shared in multiple Facebook posts claims to show police in Spain rounding up people aged 50 and above to transfer them to quarantine centers amid the novel coronavirus pandemic. The claim is false; the footage was circulating months before the outbreak and actually shows police in Azerbaijan detaining anti-government protesters in the capital Baku.

The video clip was published in several posts on Facebook, including this one posted on April 3, 2020. It has been viewed by nearly 5,000 people on the social network.

The post’s caption reads: “This is the situation in Spain. Picking up all 50 years old and above from the streets and dumping them into police vans like animals to take them to be quarantined in centers (sic).” 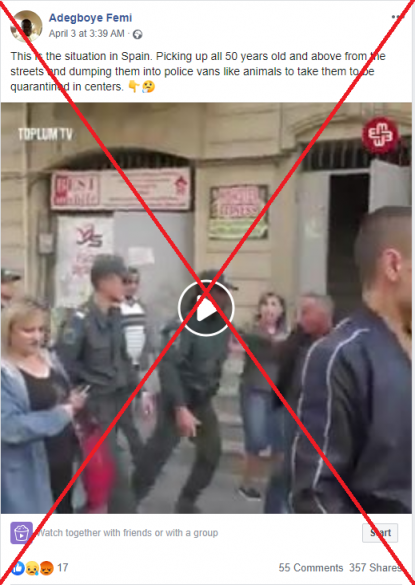 The clip appears alongside a similar claim in other Facebook posts published here and here in Nigeria as well as elsewhere in Africa, including Zimbabwe, Zambia, and Uganda. AFP has debunked a similar claim published in India here.

The claim is false; the video clip was shot in Azerbaijan’s capital Baku during an unrelated incident.

AFP ran a reverse image search using key frames extracted from the video and found a version with the same footage uploaded on the YouTube channel of Berlin-based Azerbaijani news network Meydan TV on October 21, 2019 -- weeks before the virus struck.

The video’s Azerbaijani-language title translates to English as: “Images of police violence and insults to protesters”.

The video's caption translates to English as: “Authorities and YAP officials claim that police did not use violence during the October 19 rally. We have collected images of violence for you during the action. Follow, decide for yourself. Share it so that it reaches the official bodies, maybe they took measures.” YAP is the abbreviation of Azerbaijan's ruling New Azerbaijan Party.

The police actions during the Baku protests were widely covered by international organisations, including US-based campaign group Human Rights Watch.

Governments across Africa and beyond have imposed travel restrictions and declared lockdowns to contain the spread of COVID-19, which has infected more than a million people and caused more than 50,000 deaths globally, as reported by AFP here.