A video purporting to show trains flying over China has been shared on Facebook, Twitter and YouTube. The claim is false; the video in fact shows computer generated imagery created by a simulation platform.

The four-minute video was published on Facebook on February 1, 2021.

“Flying and floating train in China,” the capion reads. “Amazing.” 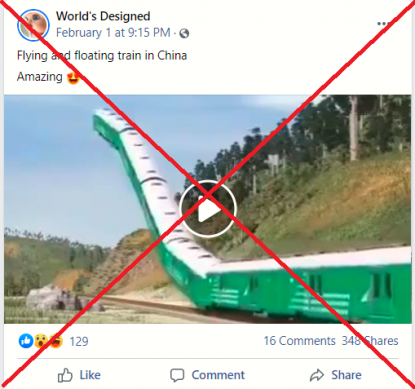 AFP ran a reverse image search on Google using keyframes from the video and found it in fact shows computer generated imagery.

The footage was published on a verified YouTube channel called Dendi Komara Railfans ID on August 10, 2020.

The YouTube video, which has more than 30 million views, has an Indonesian-language description that reads in part “Nama Game: Trainz Railroad Simulator 2019” and “This video is made for entertainment purposes only.”

AFP has previously debunked a false claim that the video shows a flying train in Japan.