The video shows Chinese citizens being evacuated from Iran in 2020

A video has been viewed hundreds of times in multiple Facebook posts in May 2021 alongside a claim it shows China evacuating its citizens from India. The claim is misleading: the video actually shows Chinese citizens being evacuated from Iran in March 2020.

The video was shared in this Facebook post published on May 21, 2021. It has been viewed more than 200 times.

The post’s simplified Chinese-language caption translates to English as: “Watch how the plane that China sent to India to evacuate citizens was arranged.” 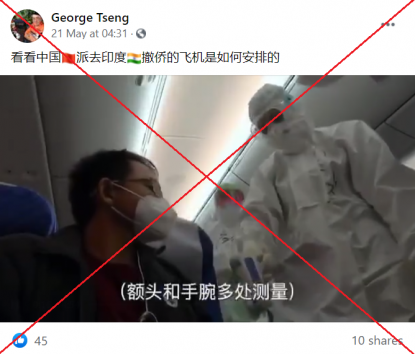 The four-minute 54-second video shows a man self-recording his journey to China from a foreign country.

The clips ends as he reaches hotel quarantine.

People can be heard speaking in Mandarin language throughout the video. Simplified Chinese-language subtitles are overlaid at the bottom of the video.

The footage began circulating online after India suffered a huge surge in coronavirus infections. AFP reported on the crisis here.

The video has also been shared alongside a similar claim, including here and here on Facebook.

Some Taiwan-based users posted the video, including here and here, alongside captions urging Taiwan to learn from the virus control measures. Taiwan was facing a growing Covid-19 outbreak in May 2021, as reported in this AFP article.

It actually shows China evacuating its citizens from Iran in March 2020 due to the Covid-19 pandemic.

A keyword search found this longer version of the video on YouTube, dated March 11, 2020.

The corresponding image can be found from the YouTube video’s four-minute, 51-second mark. 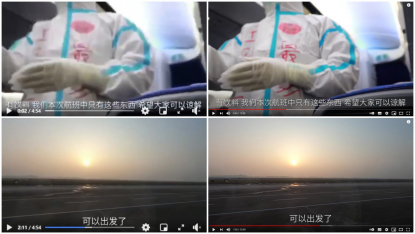 The YouTube video’s headline translates as: “The situation in Iran is out of control, the Chinese Embassy sends a chartered plane to pick up people [Chinese citizens], netizen: we have a strong motherland! How did China Evacuate Residents From Iran?”

YouTuber Liu Weilong told AFP on May 25, 2021 that he filmed the video.

“It took place in March 2020, when China Southern Airlines evacuated some Chinese citizens from Tehran", he said.

“It shows evacuating Chinese citizens from Iran, and has nothing to do with India”.

His video was included in various Chinese reports about China’s evacuation of its citizens from Iran in March 2020.