Skip to main content
Palestinian Ryad Eshkuntana, checks his daughter Suzy, as they receive medical care at Al-Shifa hospital in Gaza City, on May 19, 2021, after his wife and other children were killed in an Israeli air strike. - Deafening air strikes and rocket fire once more shook Gaza overnight and early today amid an international diplomatic push to broker a ceasefire after more than a week of bloodshed. (Photo by MAHMUD HAMS / AFP)

In a video viewed tens of thousands of times on Facebook,  former Israeli defence minister Naftali Bennett purports to show a photo of Al-Shifa hospital in Gaza City, which he accuses of ties to Palestinian militant group Hamas. However, the photo is actually a Google Maps screengrab of Shifa International Hospital in Islamabad, Pakistan.

In the two-minute video posted on Facebook, Naftali Bennett, who served as Israel's defence minister from November 2019 to May 2020, responds to model Bella Hadid, and comedians Trevor Noah and John Oliver after they criticised Israel for killing civilians in the latest spate of Israel-Palestinian conflict.

"The 'great philosophers' of our age, Bella Hadid, John Oliver and Trevor Noah are slamming Israel for killing civilians,” Bennett says. “As a dad of four children who spent the last week in a shelter and as Israel’s former defence minister, I’d like to explain why innocent people are sometimes caught in the crossfire in our just war against terrorism”.

A photo of a hospital building with a signboard reading “Shifa International” then appears.

“Ever hear of the Shifa hospital? It’s the largest medical complex in Gaza. It’s also where Hamas headquarter is located while they’re conducting terror actions against Israel,” he says.

Israel has long accused Hamas of hiding militants in civilian facilities, such as hospitals and schools. 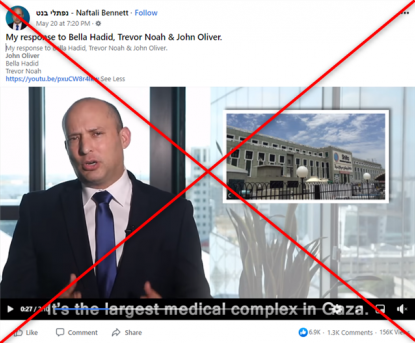 A screenshot taken on May 26, 2021 of a misleading Facebook post by former Israel Defence Minister Natfali Bennett

The largest hospital in the Gaza Strip, Al-Shifa treated hundreds of people injured in Israeli airstrikes that pummeled the enclave during 11 days of deadly clashes in May.

However, the photo Bennett showed in his video is not Gaza’s Al-Shifa, but Shifa International Hospital in Islamabad, Pakistan.

Below is a screenshot from Google Maps showing the hospital in the Pakistani capital.

A screenshot from Google Maps showing the hospital in the Pakistani capital.

The same Google Maps photo was used in Bennett’s video.

The same Google Maps photo was used in Bennett’s video.

Commentators in Pakistan quickly pointed out the blunder.

A Google Maps screenshot comparison of Islamabad’s Shifa International hospital (L) and Gaza’s Al-Shifa hospital (R) can be seen below.

AFP has previously debunked a string of false claims about the Israel-Palestinian conflict here.