This video shows children praying at a religious event in Kyrgyzstan

A video has been viewed tens of thousands of times in multiple posts on Facebook that claim it shows Uighur children praying in Xinjiang. The claim is false; the video was originally captured by a Kyrgyzstan-based television channel of a religious event in Kyrgyzstan. 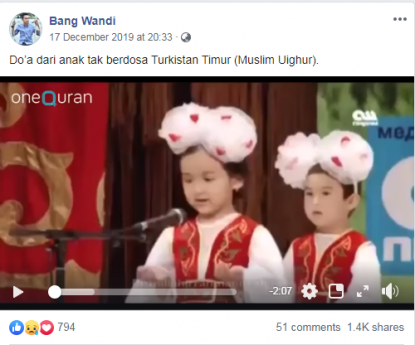 The same video was also published on Facebook with a similar claim here and here, and viewed thousands of times.

“East Turkestan” is the name Uighur activists frequently use to refer to the Xinjiang Uygur Autonomous Region in China.

It has been estimated that more than one million Uighurs have been detained in camps located in the northwestern Chinese region of Xinjiang, as reported here by AFP on December 20, 2019. The region's Uighur Muslim population have allegedly been subjected to severe human rights abuses.

The claims made in the Facebook posts are false; the video actually shows children at a religious event in Kyrgyzstan.

The video’s Kyrgyz-language title translates to English as: “Little girl which brought tears to everyone's eyes // Sincere wishes from a little girl”.

A Kyrgyz-speaking journalist told AFP translated the video and said the girl was reciting a prayer at a religious event in Kyrgyzstan.

The girl's comments translate to English in part as: “Oh Allah, You are kind, charitable, merciful and just. You grant life.

“I ask You make it so children are not orphaned, parents don't fight or divorce and so that they have money.

“So that the retirement homes and orphanages are emptied.

“So that Kyrgyzstan becomes a prosperous country with peace and stability and that we are proud of it.”

According to the description on its YouTube channel, Osh Pirim TV is based on the city of Osh in Kyrgyzstan.  The TV station's logo can be seen in the top right-hand side of the video.

Below is a screenshot comparison between the video in the misleading posts (L) and the original video (R):

The misleading video also has a logo “OneQuran” on the top left side. OneQuran is an Indonesian-based Islamic social media channels founded by a popular Muslim cleric Yusuf Mansur.

The Facebook page for OneQuran published this two-minute, seven-second-long version of the video on September 6, 2018, with Indonesian-language subtitles.

The video’s caption translates to English in part as: “This is the story of a praying kindergarten student in Kyrgyzstan. And suddenly she burst into tears.”

Below is a screenshot comparison between the video in the misleading post (L) and the video posted by OneQuran (R):

A group of men in the audience can be seen in the footage wearing ak-kalpak, the traditional Kyrgyz hat.

Below is a screenshot comparison of ak-kalpak worn by men in the original video (L) and AFP photo (R):