A video of soldiers in a tug of war has been viewed more than 15 million times on Facebook alongside a claim that they were Indian and Pakistani troops. The claim is false; the video actually shows an informal competition in 2012 between a Canadian and a US soldier in the US state of Indiana.

The three-minute and six-second video was published on Facebook here on September 22, 2020.

An Urdu song can also be heard in the background which translates partly as: “We are Pakistani mujahid (holy warriors), we are the guardians of this land….If anyone dares challenge us, even by mistake, we will bury him.” 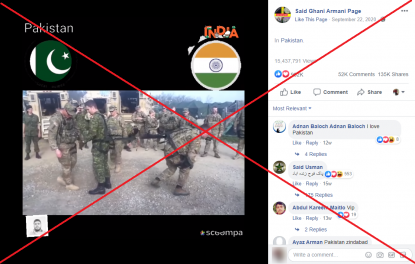 A Google reverse image search using video keyframes found that the footage was published on YouTube here in 2012. The channel's username is 31CanadianBrigade.

The video's title reads: “One on one soldier Tug of War, Canada vs USA.”

The video description reads: “Prior to the departure of 31 Canadian Brigade Group (31 CBG) personnel from Camp Atterbury, Indiana, Canadian soldiers observed US National Guard soldiers playing an interesting version of the game Tug of War.”

Windsor Star, a Canadian newspaper, also published a report about the tug of war between US and Canadian soldiers here on March 28, 2012.

The report embeds the footage and includes comment from a Canadian soldier who confirms that the video was taken during a joint training exercise in the US state of Indiana. 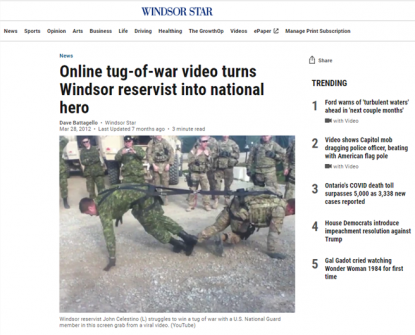 Screenshot of the Windsor Star report taken on January 12, 2021

A closer look at the soldiers’ uniforms also reveals that US and Canadian flags are pinned on the sleeves.

Below is a screenshot of the video with the soldier's flags magnified. 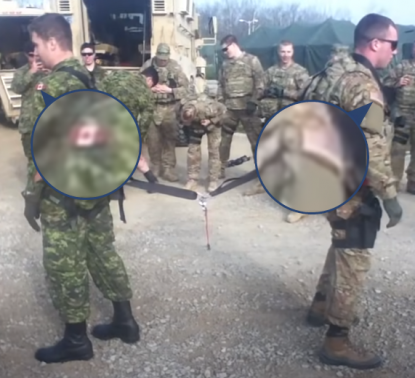 A screenshot of the video with zoomed in flags on the uniforms of the soldiers.

Below is another screenshot of the video in which Canadian and US flags are clearly visible on the soldier's uniforms. 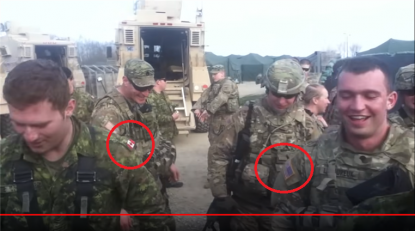 A screenshot of the video in which Canadian and US flags are clearly visible on the shoulders of the soldiers.

A spokesperson for the Canadian military also confirmed that the footage shows a friendly tug of war game between a Canadian and US soldier in Indiana in March 2012.

In an email to AFP on January 13, 2021, the spokesperson added that the YouTube account that published the original video is an old channel for the Canadian brigade that participated in the game.