A video viewed hundreds of thousands of times in multiple posts on Facebook and YouTube purports to show Filipino tycoon Fernando Zobel de Ayala "shaming" Vice President Leni Robredo in an interview. The claim is misleading: the video shows the businessman at a government press briefing in which he did not mention Robredo. He instead discussed private sector efforts to support the government’s coronavirus response. 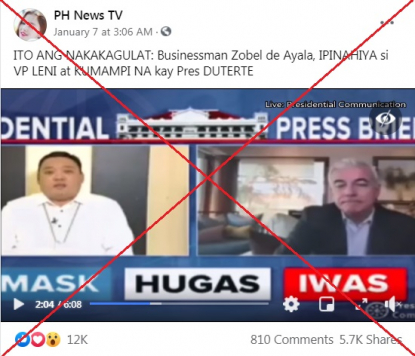 A screenshot of the misleading post, taken on January 11, 2021

It begins with a voiceover narration that states in part: "This news just in that business tycoon Fernando Zobel de Ayala has bravely spoken against the attacks by the opposition including Vice President Leni Robredo who accused President Duterte of sleeping on the job on the government’s pandemic response.

“In a current interview released by the presidential communications itself, Zobel de Ayala bravely exposed the president and the government's transactions to provide free vaccines for our fellow Filipinos."

The supposed interview starts at the one-minute 49-second mark.

Robredo, who leads the political opposition to President Rodrigo Duterte’s government, has previously criticised his response to the pandemic.

Under Philippine election law, voters can choose a president and vice president from different political parties--as was the case in 2016 when Duterte and Robredo won.

The video circulated online after Zobel de Ayala announced his company would procure coronavirus vaccines and donate a portion to the Philippine government.

A keyword search on Google found a longer video posted on YouTube by the state-run People’s Television Network (PTV).

The PTV video shows a government press briefing on January 4, 2021. Nowhere in the clip does Zobel de Ayala mention Robredo, contrary to the claim in the misleading posts.

Instead, he is shown with presidential spokesperson Harry Roque discussing efforts by the private sector to help fight the pandemic, including the purchase of vaccines. Zobel de Ayala also answers one question from a journalist about his business outlook during the pandemic.

Below is a screenshot comparison of the misleading video (L) and the PTV report (R):

Multiple Philippine media organisations, for example ABS-CBN here and Inquirer here, reported on Zobel de Ayala’s remarks during the briefing, but did not state he “shamed” the vice president, as alleged in the misleading posts.

In response to the misleading posts, a spokesperson for Ayala Corporation told AFP by Viber message on January 11, 2020: “Mr Fernando Zobel (de Ayala)'s past interview was about our Covid-19 initiatives with the private sector and in support of government priorities, especially sourcing vaccines and distribution/logistics requirements.”